The past few seasons the Tampa Bay Rays have been regular contenders in October and a big part of it has been digging out talent from all parts of the draft. Pitcher Jake McGee is one of those arms they found to be a solid arm coming out of the pen.

McGee was drafted out of the 2004 MLB Draft in the 5th round and debuted in 2010 for the Rays. The lefty has provided solid results for Joe Maddon when he comes out in games appearing in 71 games and recording his first career save this season. He's one of the under the radar guys that has helped the Rays hold on to their magic to push into the post season. 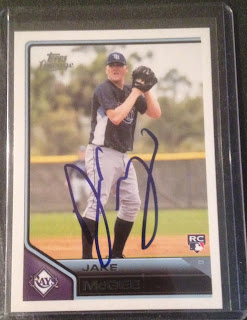 Jake McGee autographed this 2011 Topps Lineage rookie card for me when the Rays were in town to play against the Angels in the 2013 season. I like McGee and especially since the season before he gave me a Orioles commemorative baseball that I saved and ended up getting Adam Jones' autograph on.
Posted by RJ at 1:57 PM