On occasion I'll get an autograph and instead of immediately posting it I'll wait until that player does something noticeable or until he is relevant to post about. Right now with the Rays in postseason against the Red Sox Tampa Bay Rays 3rd baseman Evan Longoria is incredibly relevant and noticeable.

Longo was the 3rd overall pick in the 2006 MLB Draft taken out of Long Beach State University the home of fellow stars Jered Weaver, Jason Vargas and Troy Tulowitzki. He's been the power of the heart of the Rays lineup and been recognized with multiple All-Star selections, Gold Glove awards and been named a Silver Slugger. If a third baseman can do it well he's doing it and been one of the main challengers to Adrian Beltre's reign as top third baseman within the American League the past few seasons. 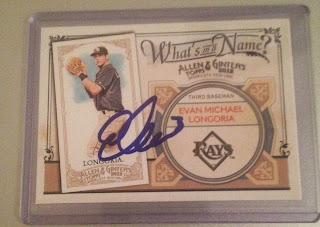 Evan Longoria autographed this 2012 Allen and Ginter "What's in a Name" card for me when the Rays played the Angels during the 2012 season. I like these cards and got his fellow star ace pitcher David Price to sign his version of the card. With stars like Longoria, Price and Ben Zobrist it's easy to see why the Rays are making waves and in the post season.
Posted by RJ at 3:21 PM