My previous post highlighted Tianna G being hot in a bikini and this one isn't that different though it is a more widely known model Alysha Nett. Alysha Nett was featured on New York Ink's series premiere episode getting her tree tattoo done by Tim Hendricks on her thigh. She's modeled for CBNC, Supreme, The Hundreds, MOOSE Limited and basically any brand that is legitimate in that world. Her tumblr is one of the top model tumblrs and she's been voted best web model by multiple different sites.

I picked up this Alysha Nett autographed 11x14 poster. 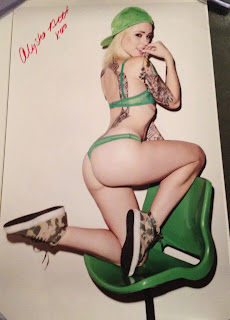 She was nice enough to toss in this second poster for my collection, and I'm happy to have added it. At some point if I find out we're going to be at the same event in LA I may bring it along to have her sign it. 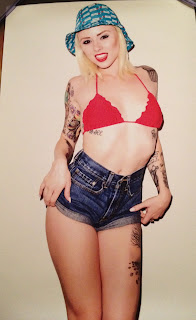 She's definitely one of the top streetwear models and I'm glad to have put her in my collection to have the top three models Alysha Nett, Tianna G and Shay Maria together in the collection. With baseball's off season only a few World Series games away I'm going to probably keep expanding my print collection while I keep busy. I'm not sure if anyone will really complain about seeing Alysha Nett looking hot.
Posted by RJ at 1:29 PM