The 3rd annual Eddie Guardado and Michael Young Stars and Strikes Bowling Charity Event occurred   January 26, 2014 and I decided to attend this year. It's proven to be a solid event and a large group of Southern California autograph seekers attended to knock out the stars that were in attendance to support Eddie and Michaels fundraiser to benefit children with Autism.

The event was set up differently from what I heard from graphers who previously attended past years. I was able to start the day off by getting UFC welterweight fighter Jake Ellenberger's autograph on this 8x10 photograph. 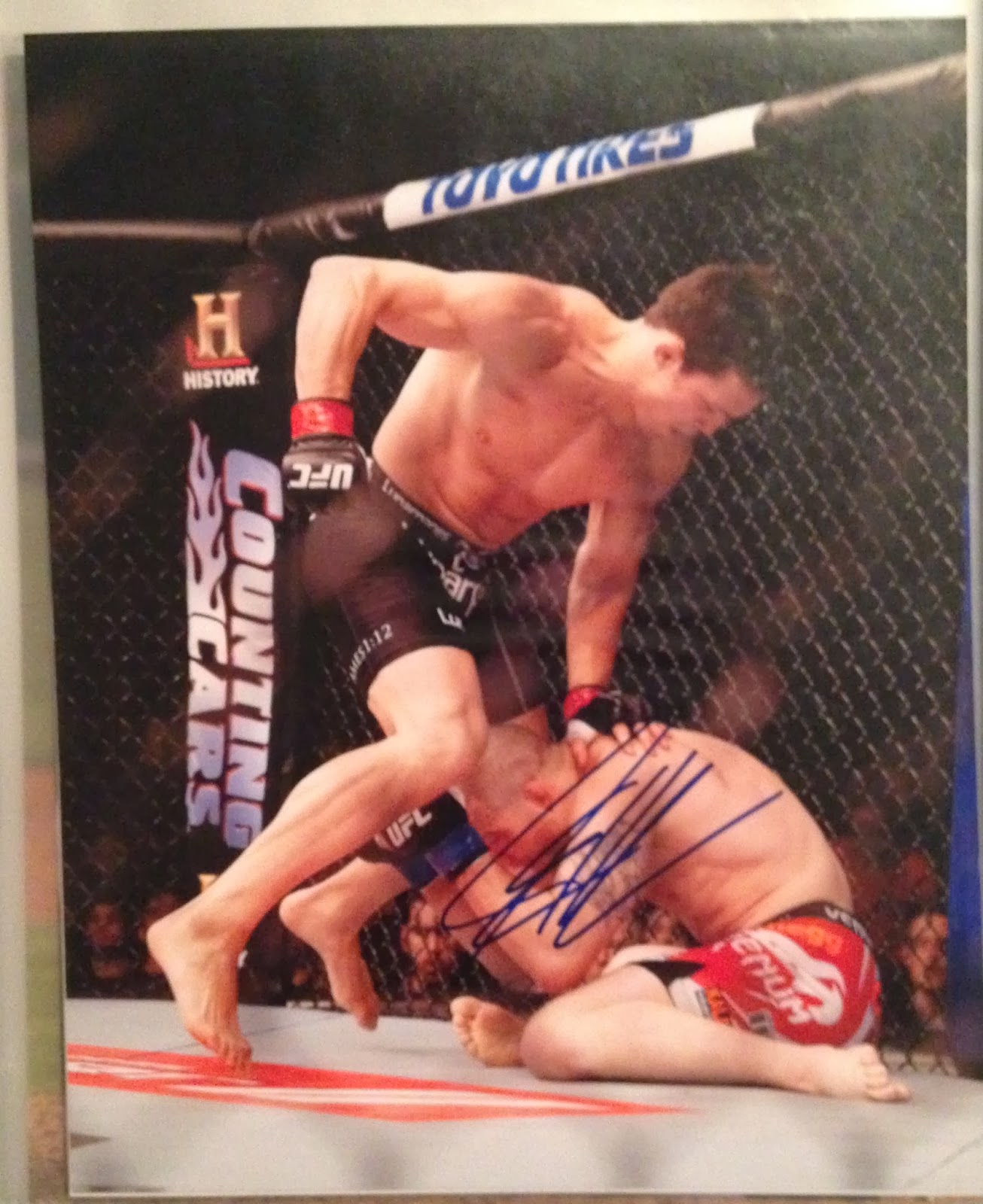 After Ellenberger signed Eddie Guardado popped out to speak to some of the event handlers, and I got Guardado's autograph on this 8x10 photograph. It was nice to add the two-time All Star and recent member of the Twins' Hall of Fame to the collection. 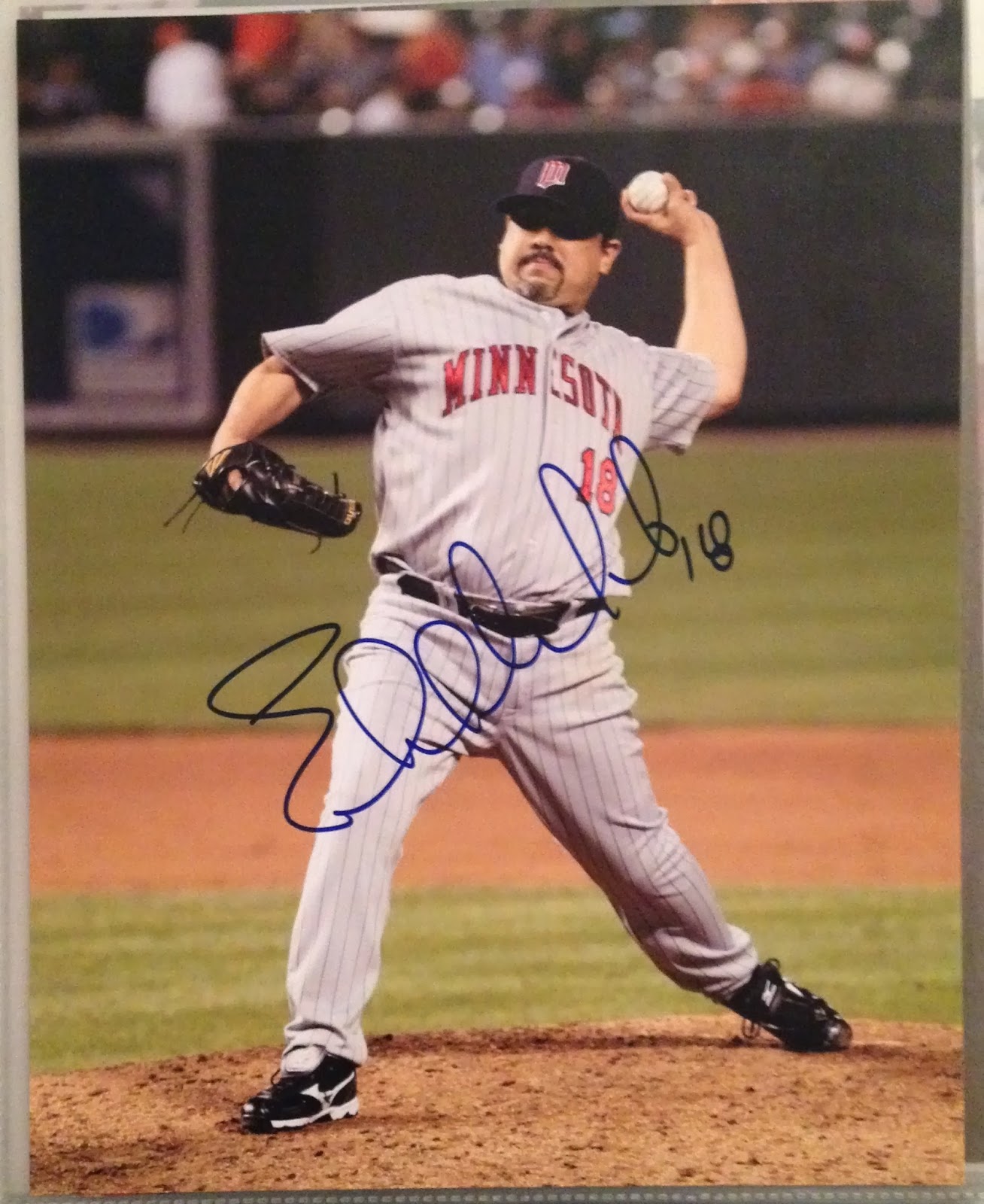 It was a good start so far and then Ian Kinsler arrived. Kinsler autographed this 8x10 photograph really nicely signature wise, but he signed on a dark spot so it's a little tough to see. Needless to say I was a little disappointed even though I'm still glad I got it signed. 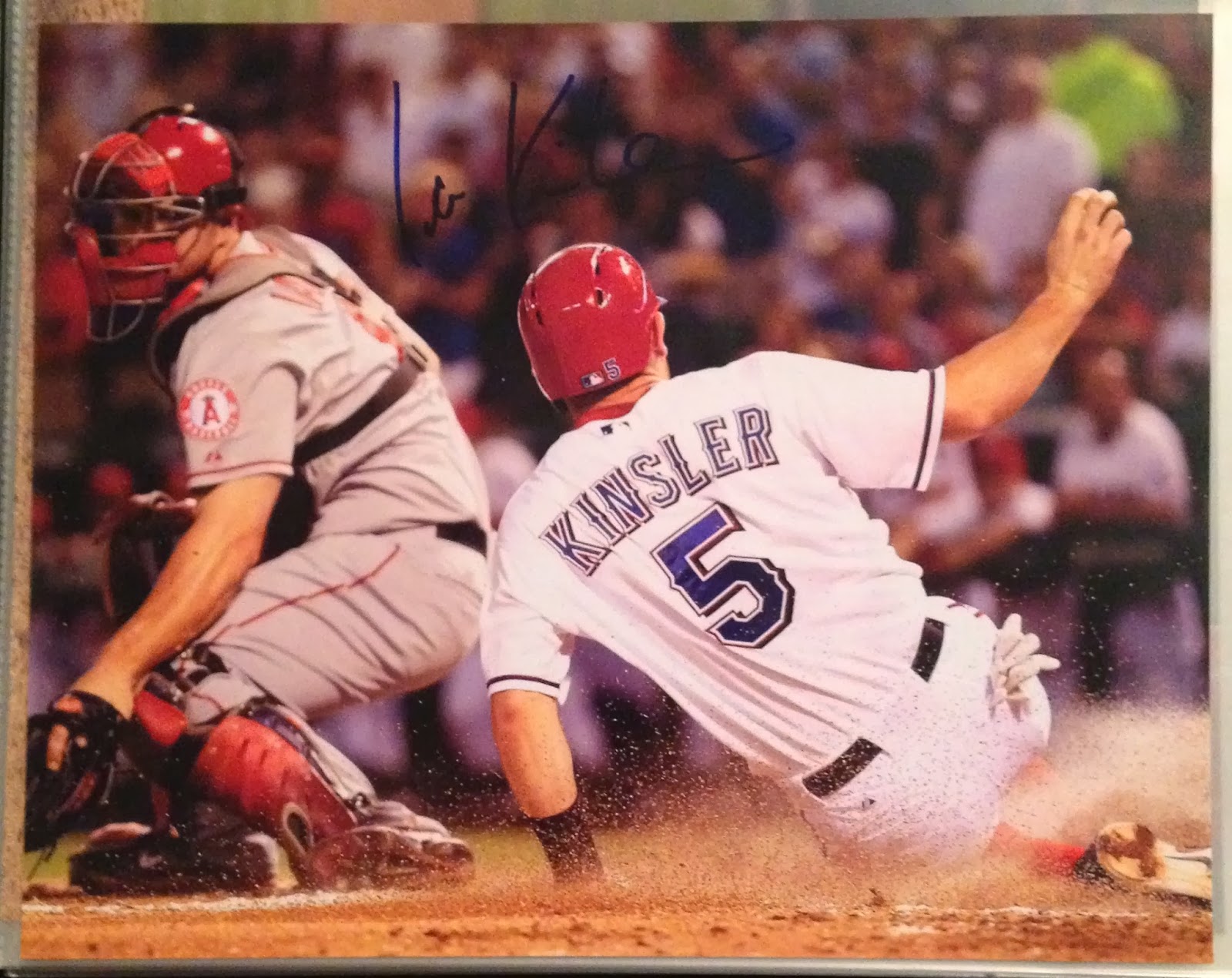 I was disappointed about the nice Kinsler signature being in a tough spot, eventually Adrian Beltre came out and I was able to get his autograph. Beltre's one of my favorite players so I'm really glad to add a nice clean Beltre autographed photograph to my collection of the Gold Glover at work. 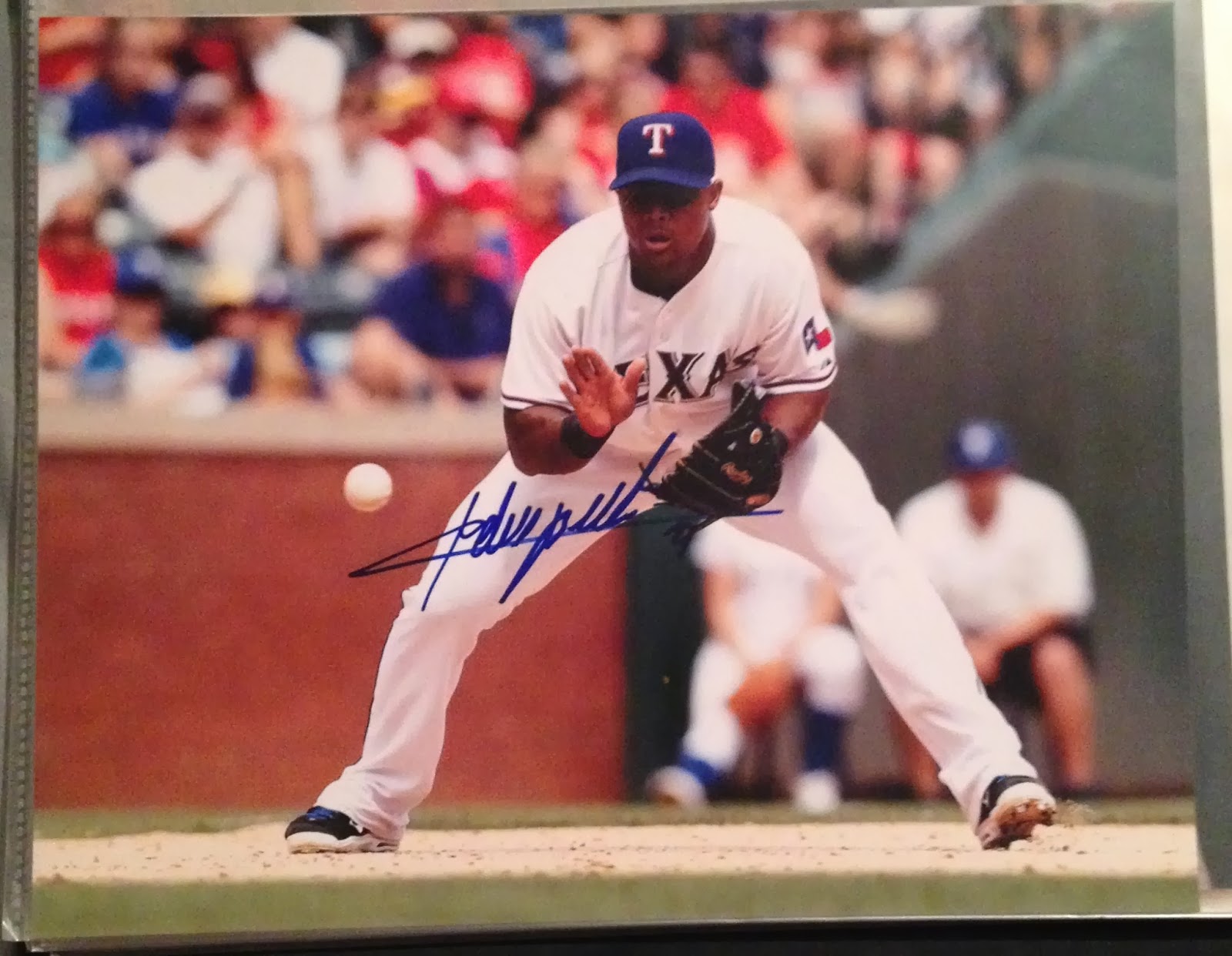 After Beltre left the next autograph I was able to get was a big one for me. It was my first time getting Adrian Gonzalez's autograph and I was excited to put the Silver Slugger, Gold Glover All star's signature in my collection on this photo. Making the photo even nicer to me is a opted for a photo of him still playing with the Padres and swinging a nice Trinity Bat Co. piece of wood. 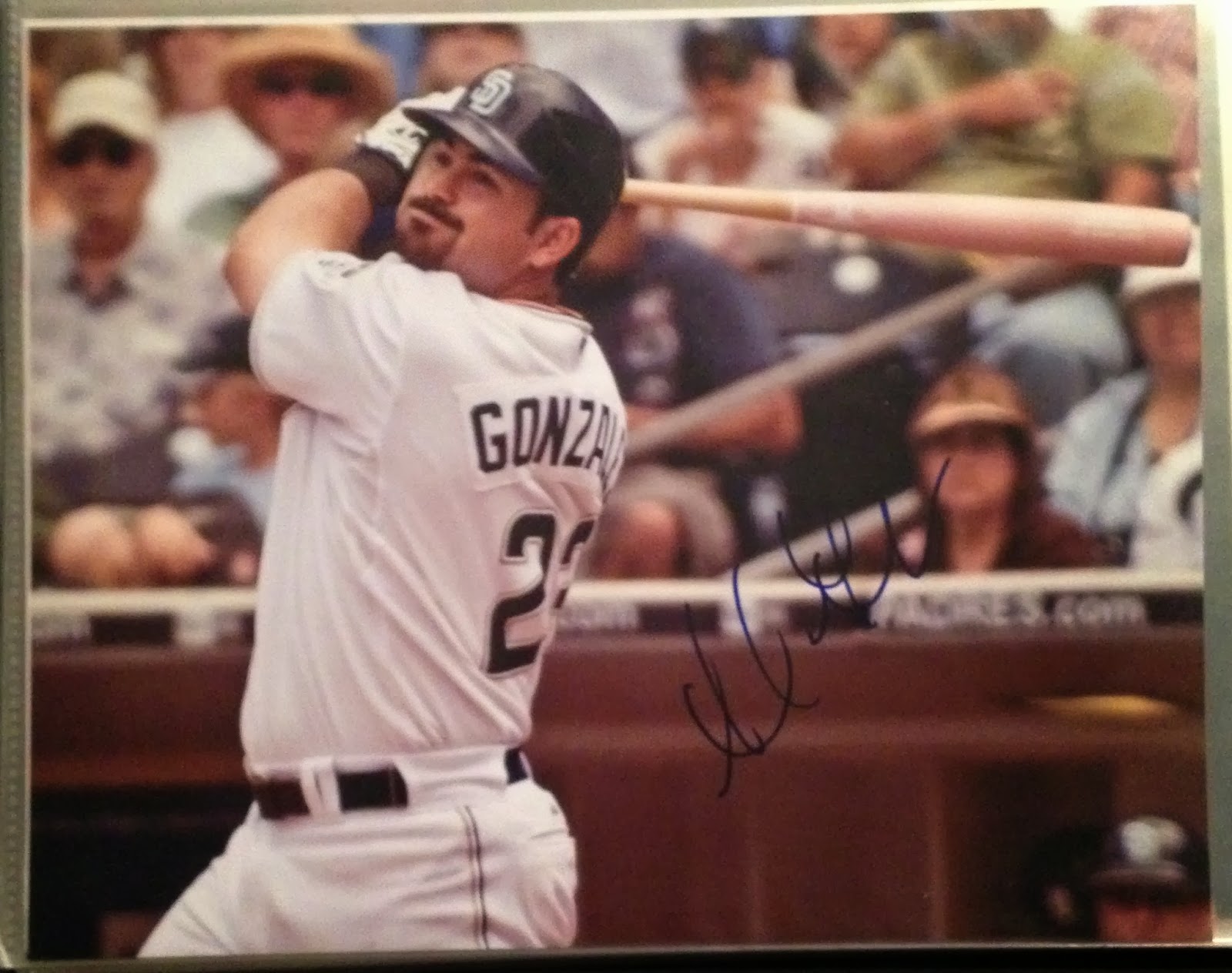 After Gonzalez left the next autograph I got was a surprising one but it was a good one I was very excited to have. 3-time Olympic gold medalist Misty May Treanor was in attendance with her husband MLB player Matt Treanor. I got Misty May autograph a baseball on the sweetspot and then had Matt Treanor sign the ball also and he got a kick that she had already signed the sweet spot before he could. 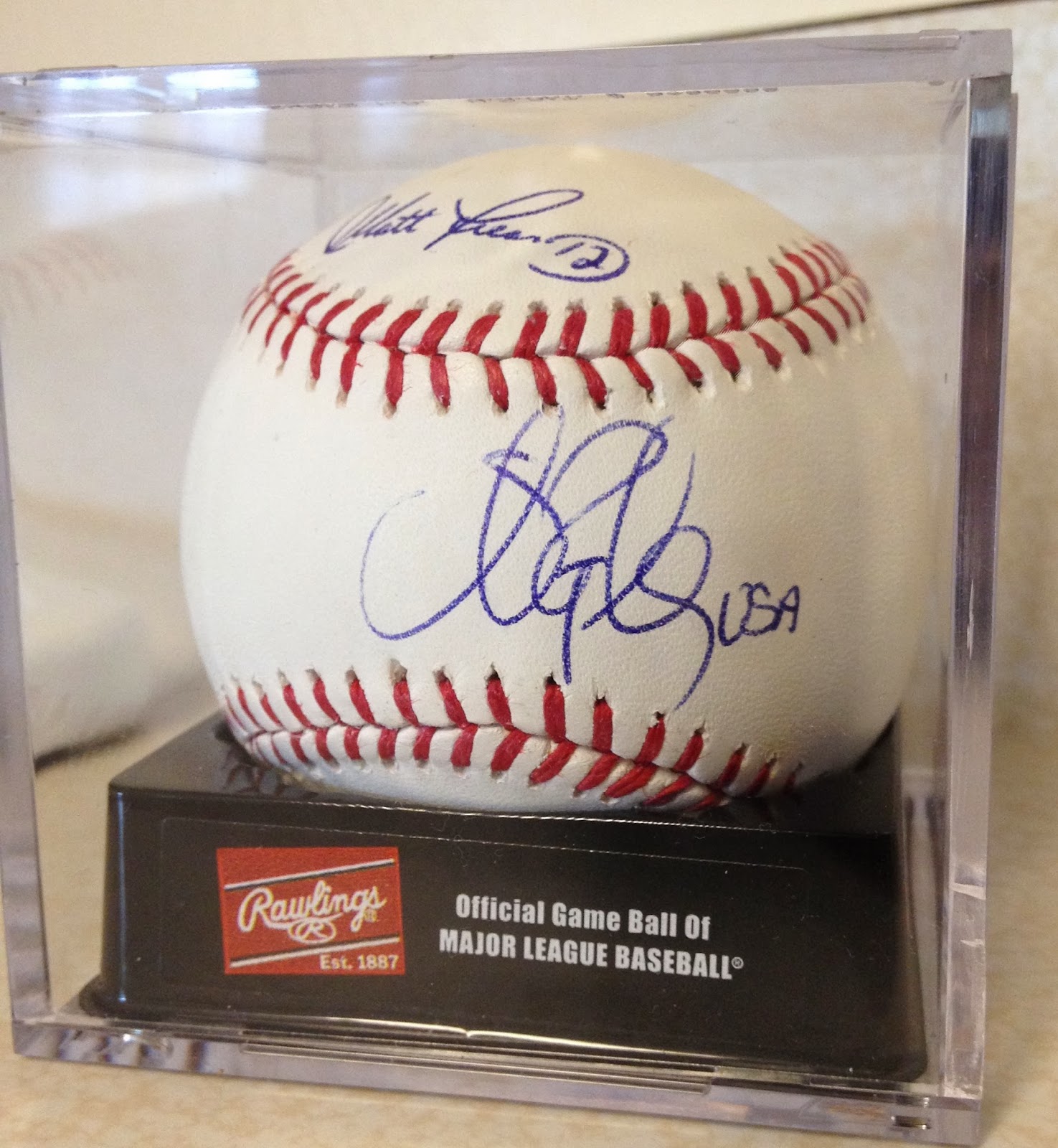 The last thing I was able to get was this Michael Young autographed 8x10 photograph even though like his former teammate he also signed it in a spot where it's tough to see. I'm glad I was finally able to put something from the 7x All Star in my collection since he's been a great consistent player to watch growing up. 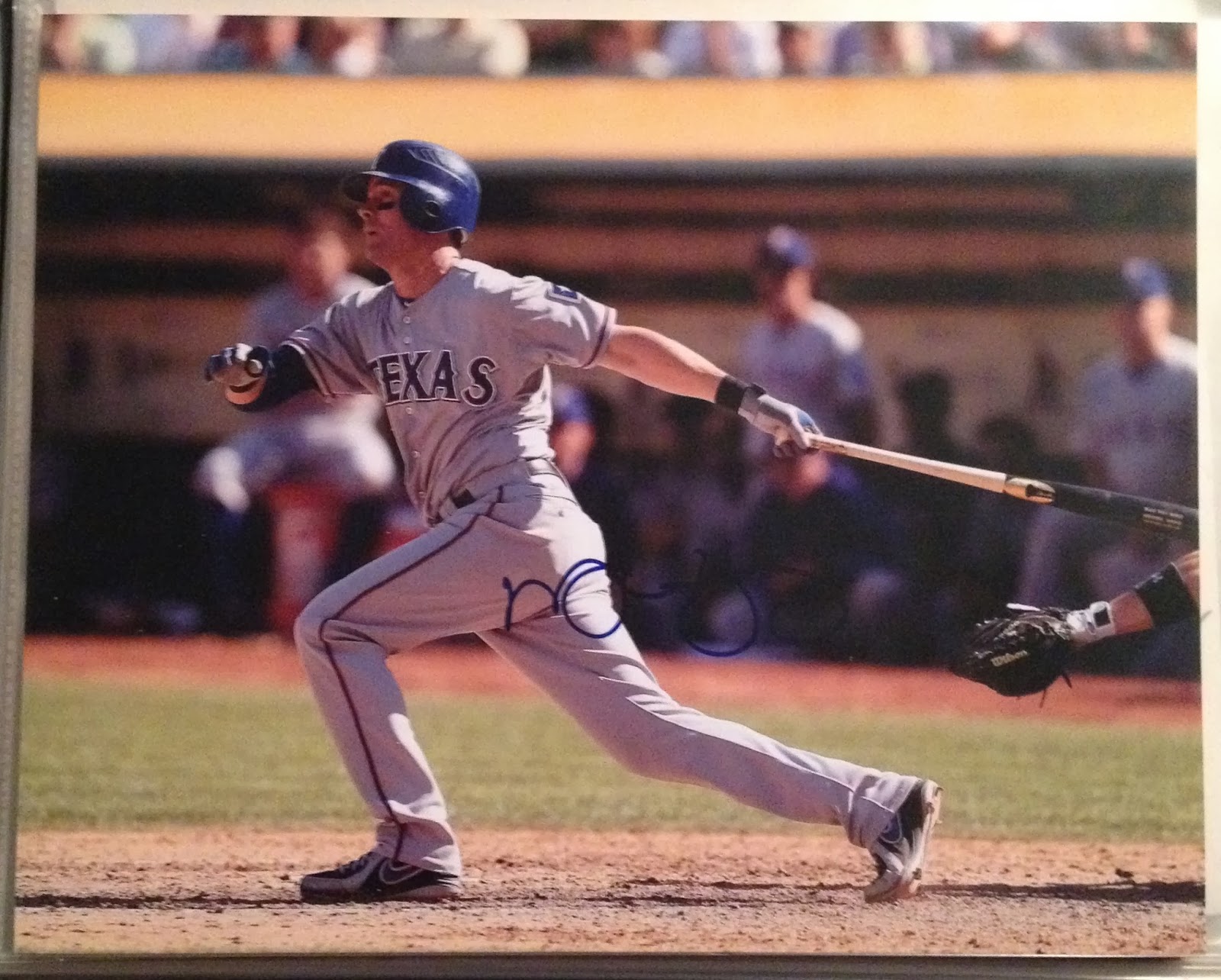 The whole thing was a great event and there were even more signers there at the event that I either couldn't get or didn't have anything for them to sign. It was definitely a nice way to wrap up the off season and add some major names and nice items into my collection.
Posted by RJ at 8:05 PM