But Gio Go-nzalez isn't going anywhere this week but to the mound. As mentioned before in my first contest I was able to get Oakland Athletics pitcher Gio Gonzalez to sign for me before a game at Angel Stadium. Gio put on a pretty good show during batting practice running around competing for fly balls against some of the other pitchers and when a ball was in doubt used the always reliable method of throwing his glove at the ball to knock it down.

Gio was a 1st Round supplemental pick for the Chicago White Sox in 2004 but was traded around as a top prospect before finally breaking into the Majors. He was sent from the White Sox to the Phillies, back to the White Sox, and eventually scooped up by Oakland's Billy Beane in 2008 where he would finally make an MLB appearance.

Building off his success last season Gio has made 2011 a strong year for him so far. In 12 starts despite the slumping A's offense he has a 5-4 record with an outstanding 2.62 ERA despite having 33 Walks due to a .233 average hitters have against him. Who knows with the way the A's offense has been, no dominant closer, and 4 other starters on the DL Gio's first half may make him the A's lone (and league required) representative to the All-Star game. 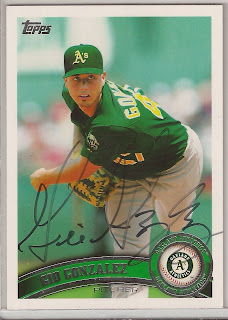 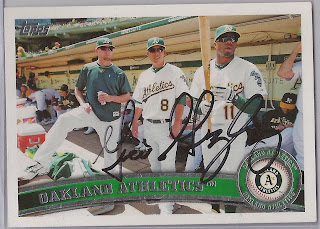 Gio Gonzalez autographed this Topps 2011 card for me and then an additional (and awfully pretty) 2011 Team card after batting practice at Angel Stadium during a four game series in Anaheim.
Posted by RJ at 4:23 PM