Or at least one of the best. Tony Phillips played in the Majors for 18 years and on 6 teams in almost every position a player can man. While some think teams ask a lot of Michael Young and Ben Zobrist, Phillips played second, shortstop and third regularly while also logging more than 100 games in left and right field with 3 games short of 100 in center.

The 1978 first round pick was selected 10th overall by the Expos but surprisingly despite his 6 teams he never played for them. Instead he debuted with the Oakland Athletics in 1982 and would be a member of the 1989 World Series championship team after being defeated in the 1988 World Series by the Los Angeles Dodgers.

Phillips left the A's to join the Tigers and he would master the skill that would extend his career to almost two decades, the ability to take a walk. In hist first year with the Tigers Phillips would end the season with 99 Walks against only 85 strikeouts. For the rest of his career he would excel as being an on base machine and be driven for 90+ Runs 7 times and 4 of those times would be for more than 100 runs.

At the end of 18 seasons he would have scored 1300 Runs and collected 2023 hits. Even more impressively Phillips would have 1318 Walks which combined with his .266 average for a .374 career On Base Percentage, good enough for 220th all time. 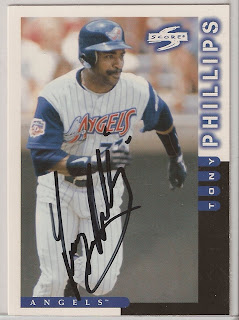 I was able to get Tony Phillips to autographed this 1997 Score card for at Angel Stadium as part of the 50th Anniversary celebration.
Posted by RJ at 3:49 PM