Ok well maybe not a rock star, but a player who has the same name. Cleveland Indians catcher and first baseman Carlos Santana responded to my TTM request though he didn't respond to the letter I included.

Santana was a Dodgers prospect signed in 2005 until he was traded to the Indians with John Meloan for Casey Blake in 2008. While in the minors he played for local minor league team the Inland Empire 66ers and did his part to become the organization's top prospect.

In June, 2010 Santana was called up to join the Indians and immediately slotted in the line up 3rd. He was having a solid rookie season until he walked the hallowed halls of Fenway Park. While covering the plate, Red Sox rookie Ryan Kalish came in trying to score sliding cleanly through Santana's legs. Santana was carted off the field and three days later he had to have season ending surgery to repair his torn lateral collateral ligament in his knee.

2011 has been full of ups and downs for Santana and the Indians as he deals with some struggles at the plate against right handers. However despite his poor .232 average, Santana is tied for 4th in the AL with 49 Walks and still shows flashes of power with 10 Homers. His ability to go yard has etched his way into the Indians' record books by being the first Indians catcher ever to end a game with a grand slam.

His defense however still has much to be desired and it's not clear how long in his career he will stay behind the plate as Santana has only caught 7 of 40 base stealers. When he is behind the plate Indians pitchers have a pedestrian 4.29 ERA and 26-23 record. The 4.29 ERA is even more surprising when you consider as a team, Cleveland has a 3.90 ERA. 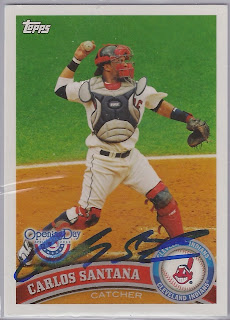 Santana was nice enough to sign the Topps 2011 Opening Day card I sent to the Indians stadium, and got it back to me after 41 days. It was awesome to get the card signed, but less awesome to see Santana put his thumb on his first name while signing his last name. I suppose it just means it's authenticated with his fingerprint.
Posted by RJ at 3:47 PM