And this time I was able to make it to the top. Former catcher Mr. Marc Hill was nice enough to make a quick TTM return to me and shed a little bit of light about his career in the Majors for me.

Marc Hill was able to play for four different teams from 1973 to 1986 as a backup catcher primarily for the White Sox and Giants. Through his 14 season career Hill was only a team's main catcher twice, for the San Francisco Giants playing a career high 108 and 117 games. Marc eventually end his career with a .223 average and 34 Home runs.

Hill would be a part of the 1983 "Winning Ugly" Chicago White Sox where then Manager Tony La Russa won his first Manager of the Year award for the scrappy club ending the season with a blistering 60-25 second half. The White Sox wouldn't be able to translate their second half success into October parades after being knocked out by the Baltimore Orioles in the ALCS 3 games to 1. 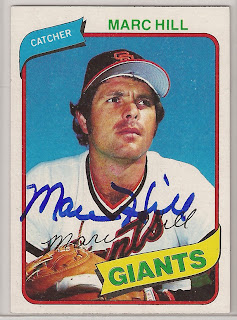 Mr. Hill was nice enough to send this 1980 Topps card I got through the Diamond Giveaway back to me with a nice and clear autograph above the original on the card facade. It was cool to see decades later his signature even with a sharpie hasn't changed very much.
It was even nicer of him to respond to a few questions I included in the envelope I mailed him. When asked in my letter:
What did you see as the key to having so many years played at the Major League level?
Perhaps taking a page out his dad's professional playing career as a pitcher in the St. Louis Brown's organization in the 40's, Hill responded "Consistent and to enjoy the game the people you meet"
What was the clubhouse like during the "Winning Ugly" 1983 White Sox season?
Considering his previous response and how was kind enough to share a few thoughts in the letter I think the response was pretty in character for Mr. Hill "Just having fun - Season went fast"
Who was your favorite pitcher to catch throughout your career?
Harking back to his White Sox days from 1981-1986, Hill picked a few of the pitchers he worked with. They just happen to both be pitchers who not only won their own Cy Young awards, but one is even in the Hall of Fame "Tom Seaver - LaMarr Hoyt"
What was your favorite city to play in as a visitor?
Considering he seems to be quite the standup guy Hill picked a city to match "Boston"
Mr. Hill responded to my letter after only 10 days to his home address.
Posted by RJ at 10:57 PM