Or at least it was when former Angel Rick Reichardt was the first player to hit a home run at Anaheim Stadium in the 1966 season. Rick is a historic player not only for Angel franchise history but also for the entire league as he is one of the primary reasons Major League Baseball established a Draft.

A slugging outfielder from Wisconsin, Rick was a two-sport star who was the starting fullback for the Badgers making two Rose Bowl appearances on the team. Eventually in 1964 baseball clubs got into a bidding war for the prospect in the 1964 off season with the Angels eventually winning the player for a $205,000 signing bonus. To avoid such further bidding wars the Major League draft was instituted to protect the interest and finances of the franchises. The initial Draft may have provided such protections, but now with the current player signing bonuses some players may turn out to come at a discount if such bidding still occurred compared to their draft slot bonuses.

He played only sparingly in the 1964 and 1965 seasons before becoming a regular in 1966 when Anaheim Stadium opened. He was the first player to go deep in the new stadium and on April 19th he hit a solo shot off Tommy John. He was having a promising season but was eventually cut short of his promise by a congenital kidney blockage that forced the removal of his kidney.

He was able to play a further seven seasons in the Major Leagues but was never able to play at the same caliber as before his surgery, only cracking 20 homers once in his career. Reichardt finished his major league career in 1974 with 116 Home runs and a .261 batting average. 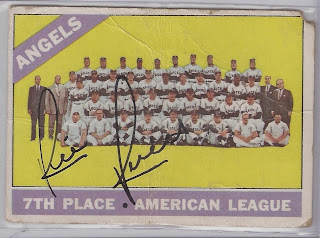 Reichardt signed this Topps 1966 Angels Team card for me that I was able to get through the Topps 50th Anniversary Diamond Giveaway at Angel Stadium due to the 50th Anniversary promotion. I wasn't all that pleased with the quality of the card with all the creases, bends, and missing corner; but for a 55 year old card I guess it was the best Topps was able to do. Thankfully Mr. Reichardt had a nice signature that he put on the card to help add some wow factor back to the card.
Posted by RJ at 8:19 PM