Or at least one named Bob. Son of late third baseman Ray Boone, and father of second baseman Bret Boone and utility player Aaron Boone, former Angels catcher Bob Boone Has been around the Majors in some sort of capacity since the 70's.

The San Diego native began his career with the Philadelphia Phillies after being taken in the 6th round of the 1969 draft. He was the definition of a defensive catcher, winning 2 Gold Gloves with the Phillies and being recognized as an All-Star 3-times. Most notably however, he was part of the 1980 World Series championship team.

In 1982 Boone was shipped to the Angels where he played the second half of his career where he continued to rack up Gold Glove Awards and another All-Star selection. He contributed to Angel lore when he caught Mike Witt's perfect game on the last day of the 1984 season against the Texas Rangers on September 30, 1984.

Boone signed on as a free agent with the Kansas City Royals but he lasted only a season and a half before finally retiring as a player and moving into other roles as a manager and currently member of the Washington Nationals organization. With top prospect Wilson Ramos in the organization I'm sure Nationals fans are excited at the idea of Strasburg, Harper, and Boone taught Ramos forming a dynamic core for years to come.

When his 19 season career was over Boone's career batting line would only have a .254 average with 105 Home runs.  However he would have an illustrious 7 Gold Gloves, 4 All-Star selections, and a World Series Championship. 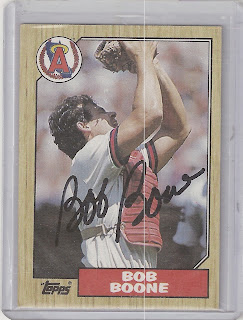 Bob Boone autographed his 1987 Topps card for me at Angel Stadium as part of the Angels 50th Anniversary celebration during the Angels vs. Red Sox series.
Posted by RJ at 2:35 PM