This time though it was a sweet return from Mr. Tom Timmermann of the Tigers and Indians. Tom was nice enough to not only sign and personalize my card, but he also responded to the questions in the accompanying letter.

Timmermann signed as a amateur free agent with the Detroit Tigers in 1960 and eventually played for the Tigers and Indians from 1969-1974. Beginning his career as an effective reliever he was converted to a starter and bounced between the rotation and bullpen. His rookie season would prove to be his best when at the age of 29 he would in 31 appearances carve out a 4-3 record and 2.75 ERA.

In 1972 the Tigers moved Timmermann into the rotation where in 25 starts he would put up a 2.89 ERA but only manage a 8-10 record. Looking to be a reliable starter the Indians acquired him from the Tigers in 1973, but he would not be effective in Cleveland and hold a 4.96 ERA in 33 appearances. Eventually Timmermann would retire with the advanced age he got his break at seeming to prevent any second chances with another organization as his six-year career would end at the age of 34 with a 35-35 record and 35 saves to go along with a 3.78 ERA. 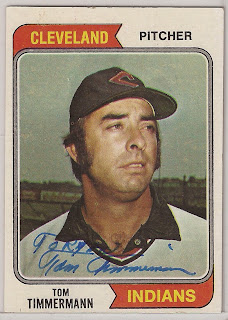 Mr. Timmermann was nice enough to personalize and sign his 1974 Topps card I got through the Diamond Giveaway. It was nice to see that he really has a crystal clear signature, and that he signed across the most visible part of the card with a extra fine point. I'd have to say it is one of the best looking I've seen.
When asked in my letter:

What was it like moving from being a reliever into the starting rotation?
Showing why he was voted Tiger of the Year by the Detroit BBWAA in 1970, Timmermann responded "You do what you have to do"


What was your favorite city to pitch in as a visitor?
Surprisingly despite the most common response so far to have been the larger east coast cities, Timmermann selected a city he had plenty of experience pitching in, "Kansas City"


Was there any moment in your career that stood out to you as your favorite?
Picking what is a meaningful moment to many players, but especially so after his long service to the organization, Tom picked a very nice memory. He responded, "Telling me to report to the Tigers after 9 years in minors"

Is there any pitch you tried to learn or wanted to master?
Probably as a result of being around professional baseball and players of all types for so many years, Timmermann responded "All of them"


Mr. Timmermann responded to my letter and request that I mailed to his home address after 20 days.
Posted by RJ at 2:23 PM