Or at least that's what one Donald says, but not former Angel infielder Donald "Donnie" Hill.

The southern California native was taken with the 1st pick of the 1981 draft by the Oakland Athletics, but didn't make his debut in the Majors until 1983 at the age of 22. After breaking into the MLB with the A's he stuck around as a part time player never appearing in more than 123 games in his 9 year career. Hill would eventually end his career after a partial season with Minnesota in 1992. He would be a career .257 hitter with 26 Home Runs and 228 RBI. 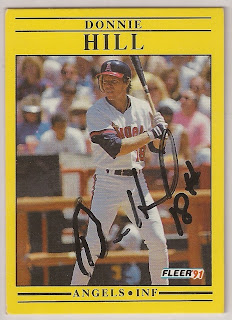 Donnie Hill autographed this 1991 Fleer card card for me as part of the Angel's 50th anniversary promotion.
Posted by RJ at 3:55 PM