Ok well maybe not a league MVP, but the 1998 Angels' team MVP Gary DiSarcina. Gary didn't respond to my letter but the former shortstop was kind enough to take the time to autograph and mail back my card.

DiSarcina was the California Angels 6th round pick in the 1988 draft and shot through the system making his first appearance in the Majors in September of 1989 to play in 2 games. The following two seasons he played in only 18 games a season, but by 1992 he took over as the Angels starting shortstop. He had an All-Star first half in 1995, but only appeared in 99 games by the end of the season. In 1999 DiSarcina appeared in his lowest number of games since taking over as starting shortstop, playing only in 81 and finally a mere 12 apperances in 2000 before he finally retired, ending his 12 year career as an Angel.

DiSarcina was a career .258 hitter, retiring just short of a hitting milestone with 966 hits. To go with his almost one thousand hits, he scored 444 Runs thanks in part to 47 Steals and 28 Home Runs.

Despite his playing career ending, DiSarcina continues life in baseball having been a manager for the Red Sox affiliate Lowell Spinners from 2007-2009. He returned to the Angels family in 2011 as a special assistant to General Manager Tony Reagins. 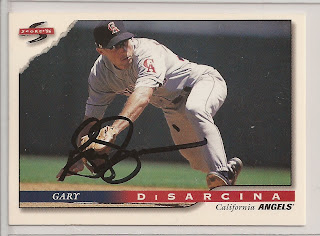 DiSarcina was scheduled to throw a first pitch for the Angels 50th Anniversary, but did not sign autographs during the game. Amazingly the game he threw the pitch for was on a Monday, and that Thursday I received my card in the mail. I guess he went through some fan mail and sent out a few! Gary DiSarcina autographed this 1996 Score card and responded to my request mailed to Angel stadium after 56 days.
Posted by RJ at 1:51 PM