Or at least that's what I tend to call out to Angel 3rd base coach Dino Ebel before every game. Today it happened to work out quite nicely, considering 2011 All-Star Howie Kendrick was sent and scored the deciding, and only, run for Dan Haren's 2-hit gem and 100th career win.

Dino was actually a member of the other Los Angeles organization, the Los Angeles Dodgers for 6 years as a professional player in the minors after signing as an undrafted amateur free agent. He was named Gulf Coast League Player of the Year in 1988 as a rookie, but despite advancing through the minors to Triple-A ball as a utility player, Dino never made it to the big show.

However through all his minor league and winter ball experience, Ebel gained significant baseball knowledge and acted as a player-manager, and eventually full time minor league manager and coach. Despite spending 17 years with the Dodgers Ebel decided to leave the organization in 2005 to join the Angel Triple- A affiliate coaching staff. Eventually after Joe Maddon left to turn the baseball and math worlds on their head (sorry Joe, but 9 doesn't equal 8 and it won't until you win a World Series) Dino was brought up to the bigs as Mike Scioscia's 3rd base coach.

He's served the Angel offense well since taking the position, and I'm sure Vlad Guerrero appreciated him  coming down the freeway since Dino served as his pitcher when he won the 2007 Home Run Derby. 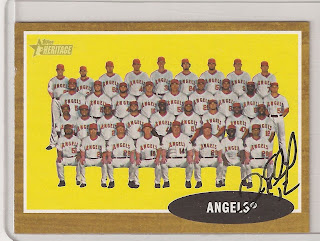 Dino was nice enough to sign this Topps 2011 Heritage Angel Team card right below himself in the photo, prior to a game at Angel Stadium while on his way out of the bullpen area. To be honest this is a really meaningful autograph for me, because prior to this I was unable to get a single Angel autograph besides Steve Soliz signing his hat I bought from the yard sale. I guess all I had to do was get Dino to sign and he opened the flood gates for the autographs to keep on coming home.
Posted by RJ at 3:24 AM