A while ago I was out and about picking up some batteries for my reading light and of course the closest battery rack to the door is normally on the checkout aisles. Well next to the checkout aisles as you all know there are the card racks, and I couldn't resist wandering over to see what was there. I decided to have a little restraint and grabbed the last pack from the box.

I was pleased to see my first 2011 autograph from the Topps 60 inserts. I'm a little unsure about the signer though. Chris Tillman was the Mariners 2nd round pick in 2006, but was traded to the Orioles with a host of prospects for Erik Bedard. He's been ranked as the best pitching prospect in the Orioles organization and second best prospect only behind All Star catcher Matt Wieters.

The Anaheim native has had a bumpy Major League career and since 2009 has made 34 Major League starts. He shows flashes of potential but against big league hitters continues to be pummeled having a career 5.35 ERA not including a shelling by the Yankees today. He fails to get the strikeouts necessary to survive with runners on as he has been unable to coax the groundouts needed to escape the perils of the AL East.

His time in the minors has been more successful as he threw a no-hitter against the Gwinnett Braves for the Norfolk Tides in 2010. He also finished as a 2010 International League ERA leader with the 4th best ERA a 3.34 with Norfolk. Despite his struggles so far with the Orioles it's likely they don't give up on their pitching prospect as a combination of Tillman and the still developing Brian Matusz can give a strong 1-2 punch to help pull the Orioles out of the AL East cellar in future seasons. As in the 2013 season when Tillman was named an All-star. 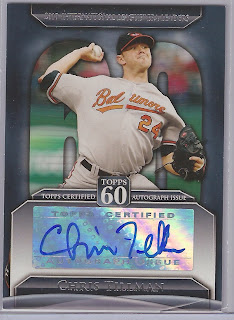 I pulled this Chrill Tillman autographed Topps 2011 Series 1 Topps 60 insert from a loose pack box.
Posted by RJ at 4:44 PM