Not that all the players who respond aren't nice, but Mr. Steve Searcy former pitcher for the Tigers was especially nice in his response this week.

Taken in the 3rd round of the 1985 draft by the Detroit Tigers, Steve Searcy looked to be a promising prospect, and in 1988 he was named the International League Pitcher of the Year. Searcy was a lefty reliever and starter for the Tigers between 1988 and 1991 before being traded to the Phillies for the end of the 1991 and 1992 season. Despite coming out of the bullpen on occasion, Searcy never logged a Save despite finishing 15 games in relief. When he finally retired after 5 seasons and 70 career appearances with 21 starts, Searcy had a 5.68 ERA and logged 140 Strikeouts. 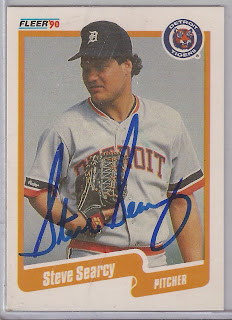 When asked in my letter:

When you threw your complete game did you think you would go the distance at any time?
Showing off the attitude of his generation of pitchers before the even more watchful eye on pitch counts and innings tossed reached the level we see in pitchers today Searcy said, "I always wanted to pitch a complete game every time I started a game."

What was the hardest part of throwing a complete game?
This time Searcy showed how the game started to change in the 90's even if his pitching mentality didn't he wrote, "Because of the way the game is now they will put in a closer or short man even if you're pitching well."

How did you adjust going to the National League from the American League?
Reflecting the work ethic that allowed him to bounce between the bullpen and starting rotation Steve said, "Same game. Just had to try to remember how to hit."

With more than 100 strikeouts were any especially memorable or important to you?
Proving even ball players are human and they all have heros too, Steve shared a really nice moment from his career and personal life, "Yes. Don Mattingly. He was one of my favorite players when I was in high school."

What was your favorite place to pitch at?
Showing why he was happy to shuttle wherever the Tigers and Phillies needed him to go, Steve showed a real love of the game itself responding, "Anywhere they would give me the ball." 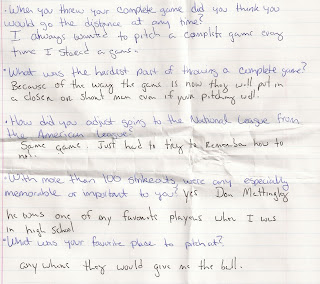 Mr. Searcy responded to my letter and autographed my card sent to his personal address after 12 days. He was nice enough to sign my 1990 Fleer card with an extremely clean signature, but not only did he sign the card he went one step forward. He also was nice enough to go an extra step by including a note that thanked me for my letter and offered me his best wishes with his signature. I can't thank him enough for such a personal touch.
Posted by RJ at 1:42 AM