Okay maybe not shining but Angels second baseman Howard "Howie" Kendrick is sparkling like an All-Star right now in Arizona for the 2011 All Star Game. One of the three Angel representatives, Howie is a first time All-Star but from initial reports coming out of Arizona is handling the experience like a pro.

Howie was taken in the 10th round of the 2002 draft by the Angels and has proven to be a steal. Considering the 2002 MLB draft was the focus of the book with an upcoming movie by the same name Moneyball, I guess as much as I love sabermetrics they don't always nail it. Since being drafted by the Angels, Howie has worked his way from fringe prospect to All-Star second baseman rostered only behind 2011 Home Run Derby Champion Robinson Cano. Hopefully the clinic Cano put on in the Derby will have tired him out and let Howie get lots of playing time behind starter Jered Weaver.

Since 2006, Howie has made the best of every opportunity to play and became a stable fixture in the Angel infield playing more games every season especially after Adam Kennedy walked in free agency before the 2007 season. While his power continues to develop Howie has maintained a strong batting average, hitting at least .279 in every season and over .300 in two seasons.

2011 has obviously been of a high caliber and Howie has been a true team player. Due to injuries he has been moving out of his own position at times and has played in left field, at first base, and at second. While his position may not be consistent, his hitting is and at the end of the first half Kendrick has been hitting .302 with 8 Home Runs and 9 Steals. Not only has Howie accumulated 29 RBI but also scored 43 Runs, including a critical run that gave starter Dan Haren a 1-0 victory over Detroit's Justin Verlander to collect his 100th Win. If he keeps up the pace Howie will have the best year of his career so far with plenty more to come. 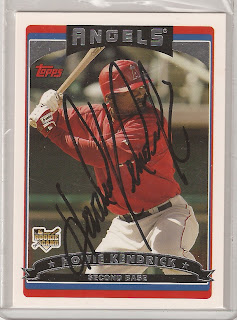 Howie Kendrick autographed his Topps 2006 Rookie card for me at Angel Stadium the day the All Star rosters were announced. I made a "Congrats 2011 All Stars" sign with Howie and Weaver's numbers (I later added Walden's number after Ron Washington added him) and Howie came over and signed for a few fans. I was hoping to have him autograph the sign but was too excited watching him sign his rookie card to remember to ask.