Well maybe moving on down to the minors is more like it. That's how Angel rookie catcher Hank Conger took his recent demotion from the big show due to recent struggles at the plate.

When the season began the Angels had Jeff Mathis, Bobby Wilson, and the 25th overall pick from the 2006 draft on the roster. Most were surprised the Angels carried three catchers, but Conger played his way onto the team and complicated the catching situation. With Mathis and Wilson out of options and likely to be stolen by another team before they cleared waivers back to AAA Salt Lake, Conger forced the Angels to carry all three with his strong spring.

When the season began Conger batted a strong .273 in April, but the following months were tough and dragged the promising young catcher's average to .214 on the season. The Angels "Hammering" Hank had been able to crank out 5 Home Runs and 7 doubles in 50 games, but with the Rangers on the hunt the Angels were unable to let the rookie catcher work through his struggles with the big league club anymore. While hitting better than Jeff Mathis, Conger's problem were compounded by nabbing only 8 of 56 base stealers and Mathis being paired with the aces of the staff.

When asked about his demotion, Conger showed poise and the big league polish he picked up when discussing the news. He definitely is a key cog to the new core of the Angels led by Peter Bourjos, Jordan Walden, Mike Trout, and Mark Trumbo. Having seen Hank earn his 2010 Futures Game MVP in person, I'm confident he will be sure to have a promising career under a halo in the future when the catching situation in the organization opens more big league at-bats for him. 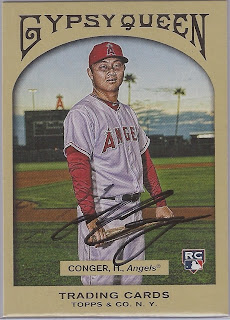 Hank Conger signed a few autographs at Angel Stadium before a game he wasn't appearing in. It was pretty nice of him to come out of the dugout for the fans, and he put a great signature on his 2011 Gypsy Queen rookie card.
Posted by RJ at 11:50 PM