I was finally able to get one of my favorite player's autograph to start 2013 at Angel Stadium. Matt Kemp is quite possibly a Dodger for life after having signed a 8-year extension in 2012 and definitely a Southern California fan favorite.

Kemp was taken in the 6th round of the 2003 draft by the Los Angeles Dodgers and debuted for them in 2006. He's a remarkable blend of power and speed having over 150 Home Runs and 150 Steals. His counting stat totals are impressive with both 500 Runs and RBI's and he should cross 1000 hits this season. He uses both of his tools to lead the league both defensively and offensively already having earned multiple All Star selections, Gold Gloves and Silver Slugger awards. Personally I think Kemp was robbed of the NL MVP award in 2011 which went to Ryan Braun instead. Now that Braun is embroiled in his second PED scandal, I'm even more set in thinking Kemp deserved the MVP even though his Dodgers missed the playoffs. I think a healthy Kemp with the new look Dodgers around him should be able to win his own MVP award in the near future. 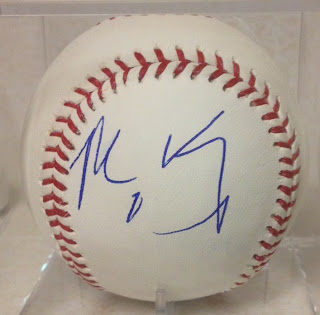 I was able to get this Matt Kemp autographed baseball at Angel Stadium. He didn't sweet spot it but it's still a nice Kemp and pretty large rather than a small scribble that I wouldn't be able to see. It still made my display case, and I'm happy with it being in my collection.
Posted by RJ at 7:28 PM