Starting pitcher and strikeout master Max Scherzer was kind enough to sign an autograph for me.

Scherzer was drafted by the Arizona Diamondbacks 11th overall in the 1st round of the 2006 MLB draft. He made it through the minors and debuted for Arizona in 2008 and since then has stuck around as a reasonably successful starter. He was a key piece in a three way deal that sent Curtis Granderson to the Yankees, Ian Kennedy to the Diamondbacks and moved Scherzer to Detroit. It's definitely been a successful trade for all parties involved since all three teams have made strong playoff runs with each piece of the deal being key components for their team.

As a starter for Detroit he's paired with ace Justin Verlander to give the Tigers a serious 1-2 punch. He competed for the Strikeout title in 2012 against Verlander and finished second with 231 on the season, but had the AL best 11 K/9. He's already compiled more than 800 Strikeouts and if he keeps up with his obscene K/9 rate he'll finish the season with more than 1,000 career punch outs. 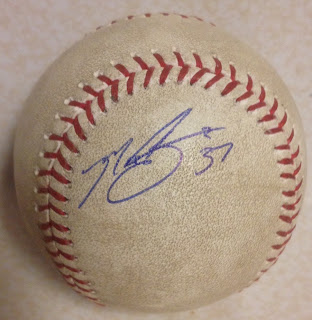 I got this Max Scherzer autographed baseball during a 2013 Tigers vs Angels series at Angel Stadium. I'm very happy to have gotten the ball signed by Scherzer since he's having a great season and not only was named an All Star but is the starting pitcher for the 2013 MLB All Star game in New York. He's got a great record and tons of strikeouts so getting Scherzer to sign my ball this year was an awesome decision so far.
Posted by RJ at 10:52 PM