Sometimes it's interesting to see how different teams and fan bases take in certain personalities. Former pitcher Mark "Gubi" Gubicza is an example of that.

Gubicza was drafted by the Kansas City Royals in the 2nd round of the 1981 draft. He worked his way through the minors and at age 21was debuting for the Royals in 1984. He was a stalwart piece of the Royals rotation and for 13 seasons was a consistent starter for the team. He was named to the All Star team 2 times and was part of the Royals' 1985 World Series Championship team. He left the Royals to go on to the Angels for only 2 starts in 1997 before his career came to a close.

When he retired his record stood at 132-136 with a 3.96 ERA and 1371 Strikeouts. He threw 42 Complete Games, 16 of which were Shut Outs out of his 329 Games Started. I'm always amazed at the number of Complete Games the studs of the 80's and 90's have compared to the starters who play now. Even the current workhorses are pretty outmatched when looking at going the distance with 8 year veteran James Shields having 20 career completes so far.

Gubi is a pretty popular broadcaster with the Angels, but he's not as consistently mobbed for an autograph after his broadcast as home grown Angel on air talent Tim Salmon is. If they worked for the Royals though I have the feeling the 2006 Kansas City Royals Team Hall of Fame inductee would be the one who had to worry about crowds of fans wanting his signature. 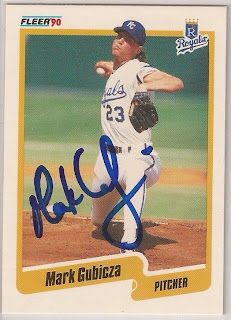