Yeah no fancy title or clever turn of phrase for this one. Why? Well honestly Hanley doesn't deserve one in my opinion. I went to get Hanley's autograph during his rehab stint with the Rancho Cucamonga Quakes and was less than pleased with the experience.

The obligatory Hanley Ramirez career stats so far. He was signed by the Red Sox as a international free agent and debuted in September 2005. He was traded to the Marlins as the center piece with Annibal Sanchez for the Josh Beckett, Mike Lowell and Guillermo Mota. He's a 3 time All-Star, won 2 Silver Sluggers, was 2006 NL Rookie of the Year and was the '09 NL Batting Champion. 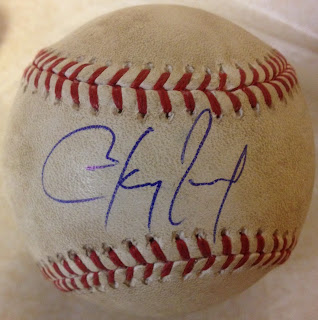 I wasn't very pleased with the experience I had getting this Hanley Ramirez autographed baseball. There were about 15 people waiting for him in Rancho and when he showed up he seemed less than happy that we were waiting for him. Sorry you have fans? He walked over and said he wasn't going to sign for everyone while he took a pen and grabbed a baseball. Originally I had printed 8x10's for him but when I saw him run with the pen I pulled out a baseball and he signed it. He then did another ball and started to walk off stopping only to sign one for a kid and a girl.

He was standoffish, refused to sign my friends jersey, and I'm not really understanding why he only signed about 7 autographs when there were only a handful more people. If you're not in the mood to sign for a while I understand that, but doing one per is fine with me and everyone would have left happy instead of plenty of disappointed faces. He was honestly the only star I've heard of going to Rancho who wasn't very pleasant to deal with. I'm not saying all the others are over the moon happy to see people wanting their autograph but they're at least less surly than Hanley was. Andre Ethier normally earns tons of a fans when he has to make a rehab appearance being pretty pleasant and funny to those who hang around for him. Even Dan Haren who was notoriously difficult to graph at Angel Stadium was more pleasant during his minor league rehab stint.

At least there were some fun moments hanging out with David, Benson, Matt, and Matt C.
Posted by RJ at 8:31 PM