And definitely one of the more meaningful ones to me to add to my collection. I was able to get Hall of Famer Tony Gwynn's autograph at a free autograph signing in San Diego before the 2013 season started, and I was pretty excited to finally add him to my collection.

Tony Gwynn was taken by the San Diego Padres in the 3rd round of the 1981 MLB Draft and flew through to the Majors debuting for them in 1982. Gwynn was one of the few players to enter the Hall of Fame having played his entire career for a single team. His career stats are obviously impressive seeing as they got him into Cooperstown. He was an 8-time NL Batting Champion, 15-time All Star, won 7 Silver Sluggers, and 5 Gold Gloves. His career .338 average knocked in 1,138 RBI's with only 135 Home Runs coming out of his 3,141 hits.

Gwynn received plenty of knocks through his career for his lack of home run numbers but he was a consistent doubles hitter with 543 in his career. Teammates who accused him of being only worried about his own stats didn't have the luxury of Baseball Reference which said with Runners In Scoring Position he batted .349 which is absurdly high and beneficial to his team. 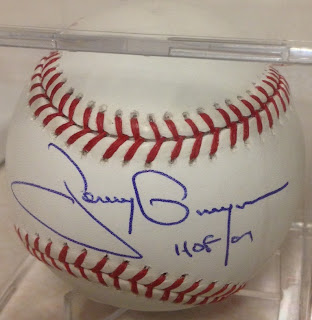 Gwynn was inducted into the Hall of Fame in 2007, coming a mere 13 votes short of an unanimous induction. At the signing I got this Tony Gwynn autographed baseball inscribed"HOF '07" on the sweetspot. He's definitely a great signature to add to the collection and I also got Gwynns autograph on my RBI Collecting Bat.

I had a lot of fun hanging out with David and Al before the signing at the San Diego Ford dealership Tony Gwynn was signing at. There was a pretty decent sized line because Gwynn is so popular a player in Southern California and who is going to turn down a Hall of Famers autograph? Definitely a reasonably well run event that I had fun at.
Posted by RJ at 8:38 PM