You can probably guess from the title that I was able to get the autograph of a Hall of Famer who shined for the New Orleans Saints. I had the opportunity to meet former offensive lineman Willie Roaf and was able to add him to my collection. I was very excited to add an autograph of a NFL Hall of Fame tackle who will reside in Canton.

Roaf was drafted in the 1993 NFL draft 8th overall by the New Orleans Saints. The rest is history as he went on to play for the Saints from 1993-2001 and then the Kansas City Chiefs from 2002 until his retirement in 2005. Of the 189 games he played in, he started them all earning recognition from his colleagues almost every season. He was a 11-time Pro Bowler, 6 time First team All Pro, 3 time Second Team All Pro, 8 time All-Conference, and named to the All Decade team for 1990 and the 2000's.

He was elected into Canton in his second year of eligibility in 2012.

Willie Roaf autographed this photo of him unveiling his bust to be enshrined in the Hall Of Fame in Canton at his induction, he inscribed "HOF 2012" 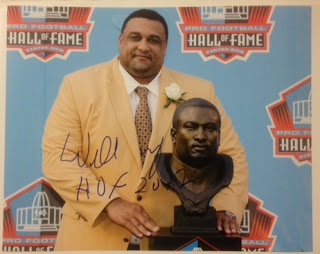 The tackle they nicknamed "Nasty" was kind enough to sign this 8x10 of him playing for the Saints against the San Francisco 49'ers about to lay down a block, and he inscribed "N.O. Saints" under his name and number 77. 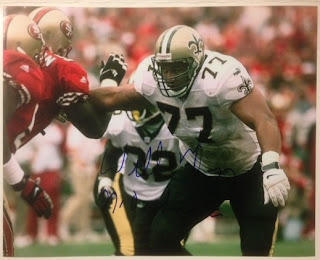 It was great to add these Willie Roaf autographed photographs to my collection. Now that I've brought him into my collection I've gotten the autograph of a Hall of Famer from the MLB and NFL. I'll need to go out of my normal comfort zone to add an NBA and NHL player to my collection so that I'll have someone from each major U.S. professional sport to display proudly.
Posted by RJ at 10:00 PM