I went to the Angels' 2013 Yard Sale at the stadium in Anaheim. Unlike the previous year I had gone it was not held under the hats, and instead was within Gate 3 of the stadium. The usual items were available for sale ranging from jerseys (I got one of Jean Segura's authentic team issued jerseys) bats (picked up a used Kendrys Morales)  helmets, hats, t-shirts, and autographed items including baseballs.

There were an assortment of autographs available and as I perused through the items I can across a weird signature that seemed out of place. Whose was it? None other than Phillies first baseman Ryan Howard. I didn't believe it and the Angels representative nodded saying that the different charities traded autographs with each other. In the selection there were balls autographed by Adrian Beltre, Grady Sizemore, Brandon Webb, Joe Mauer and the Ryan Howard ball I bought.

Howard is a 3-time All Star, '05 NL Rookie of the Year, Silver Slugger winner, the 2005 NL MVP, 2008 World Series Champion, and the fastest hitter to reach the 100 and 200 Home Run milestone. He's a hitter who knows what he wants to do regardless of the other team running an extreme shift when he comes up to bat and of his so far 1,100 career hits he's hit over 300 home runs. He's a great hitter and has even made a pretty funny appearance on It's Alway Sunny In Philadelphia as himself. 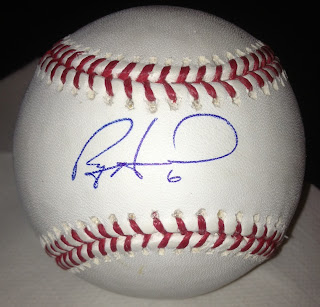 Needless to say I was beyond thrilled to pick up a certified autograph of his even though I bought it at Angel Stadium. Who's going to complain about a $20 certified autograph? Not this guy. To make matters even better there is a sweet COA sticker on it from Howard's foundation authenticating the ball. Definitely a sweet pick up that I'm very happy to add to my collection.
Posted by RJ at 4:15 PM