Has there been a player like this, though not for the reason why you think. I was able to get outfielder and former pitcher Rick Ankiel to sign for me. While Ankiel's stats may not jump off the page in either of those roles he has carved out an interesting role in baseball history.

Ankiel was drafted by St. Louis Cardinals in the 2nd round of the 1997 MLB draft as a pitcher having been one of the top high school pitching prospects in the country. He flew through the minors debuting in 1999 for the club and sticking around full time in the 2000 season when he came second in the Rookie of the Year voting to Rafael Furcal. However during the 2000 NLDS during his start of Game 1 of the series Ankiel had a mysterious breakdown in his ability to throw strikes. He was not only plagued by a lost command of the strike zone but he threw an astonishing number of wild pitches that had no chance of being caught. In 2001 the Cardinals gave him another shot as a pitcher in the MLB but to the same result so they began to shuttle him around the minors hoping he would recover from his struggles. He took another attempt at things in 2004 with a few brief relief appearances but the strike zone continued to evade him.

Ankiel wasn't able to recover his abilities as a consistent pitcher and instead opted to switch to the outfield full time since he had a strong bat. He was called back up by the Cardinals in 2007 after years of redeveloping him as an outfielder and he carved himself a role as an outfielder with a cannon of an arm and some boom in his bat. Here's where he made history to match Babe Ruth. Not since the bambino has a pitcher won at least 10 games while also hitting at least 50 career home runs as a position player. He may not be that high on the all-time Wins or Home Runs list, but where he ranks on both of those lists in the MLB is pretty historic and awesome to me. 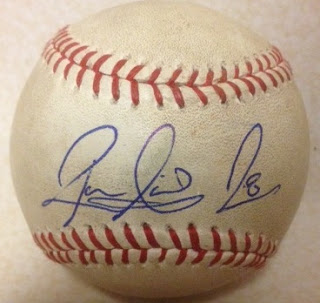 Considering the latest player to seriously split time between being a position player and a full starting pitcher was top prospect Casey Kelly (who was forced by his club to eventually decide on one or the other while still in the low minors) I doubt there will be anyone to match Ankiel and Ruth for quite some time if ever again. That makes his autograph one that should be appreciated a lot more than I think it is and definitely an interesting note within my collection.
Posted by RJ at 5:52 AM