That's right folks, the Shelby Sensation took some time to do an interview with us. Those of you who don't know who Kenny Powers is...well you obviously haven't been watching the best show on baseball since baseball and cameras came together Eastbound & Down. It's a pretty hilarious show based on the life of former star closer Kenny Powers and highly highly for mature audiences only. Kid's don't go flipping through for it, because it's on HBO and rated Mature. 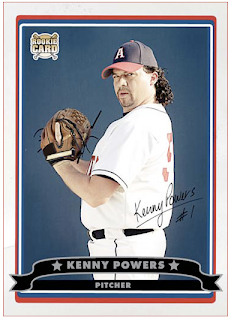 Those of you who think Logan Morrison is offensive but funny haven't seen anything yet if you haven't seen Danny McBrides' Kenny Powers twitter. It's like comparing a glass of water thrown on you to someone beating you in the face with a fire hose filled with salt water. Twice.

Anyways on to the interview and once again for Mature audiences only:

1) If you could hit any player in the batters box past or present who would it be?
Cal Ripken Jr.

2) Popping Macworthy's eye out, how many times have you watched it on Youtube?
It replays in my dreams.

3) What city has the best baseball groupies?
America

5) What's the first thing you bought with your signing bonus?
Gold bars.

6) One thing you want to get back to the Majors to do?
The legal steroids.


Thanks for the time KP, best of luck getting back to the Majors.  You can find Kenny Powers on twitter if you're interested in more.
Posted by RJ at 8:11 PM