I can't even begin to say how excited I was to get this response. It had been a slow mail week besides the awesome Jerry Dipoto letter, I hadn't been able to get anything else back. But when I saw the Arizona postmark I got a little excited. When I opened up the envelope I was thrilled to see Indians' pitcher Justin Masterson had autographed my card.

I am a huge Justin Masterson fan. I was there at Fenway for his MLB debut in 2008 and immediately saw the talent and possibility that summer. Even now when he's on the Indians I still wear my Red Sox Masterson player t-shirt when he's going to make a start despite the boo's I get around the stadium. When he was traded by the Sox to the Indians, they realized his potential and value that most had underestimated in being worth All-Star hitting catcher Victor Martinez. Years later with Masterson at the front end of the rotation for Cleveland and V-Mart hurt in Detroit it looks like the Indians got the better end of the deal with the former 2nd round pick.

So far into his promising career Masterson has a 28-38 record with a 3.92 ERA and 485 Strikeouts across 4 seasons with the Red Sox and Indians as a starter and reliever. Coming off a career year in 2011 Masterson is posed to help the on the cusp Indians challenge the powerhouse Tigers for dominance of the AL Central. I'm sure he will continue on his success and build a long lasting career. 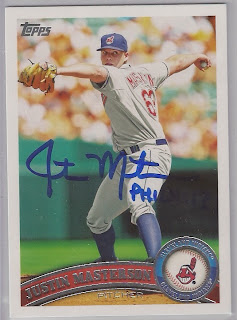 Justin was kind enough to sign this 2011 Topps card for me c/o the Indians at Spring Training in 27 days. Justin inscribed the card "Phil 4:13" as he is very well known for his faith and has even led the Pentagon's weekly prayer breakfast. I was able to get a Justin Masterson autographed jersey since then.
Posted by RJ at 3:13 PM