I'm sure by the title some of you who read the batch summaries I post before I mail out the 365 letters can guess who responded. Hall of Famer and Red Sox legend Bobby Doerr was kind enough to sign TTM for me.

Of all current players for the Red Sox, second baseman Dustin Pedroia is without a doubt my favorite. He's intense, and leaves it all out on the field and in the batters box. He continues a tradition of excellence at second that Bobby Doerr instilled in the position for the franchise after first appearing for the club in 1937. A tradition recognized by the Red Sox who retired his #1 in 1988 for his service as a player and coach.

Doerr was a generational talent who played 14 seasons exclusively for the Red Sox, though it could have been 15 if he had not been called away to serve in WWII. The 9-time All-Star while being one of the top defensive second basemen in the league, was also a dangerous hitter. When he retired in 1951, his career average was .288 and his On Base Percentage stood at .362. He had assembled more than 2,000 hits, 223 home runs, and 1,247 RBI's. Legendary hitter and teammate Ted Williams asserted Doerr was the "silent captain" of the team, a great tip to Doerr considering Williams' fickle nature about speaking to the public.

After retiring reasonably young at 33 due to injury, Doerr remained around the game as a scout and hitting coach. He is credited along with Ted Williams as being a strong influence in Carl Yastrzemski's evolution mid-career into more of a power hitter. After leaving the Sox he was the first hitting coach for the expansion Toronto Blue Jays from 1977-1981. 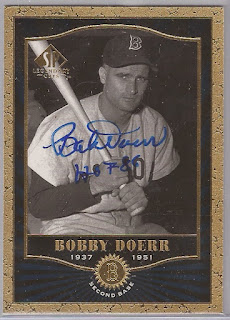 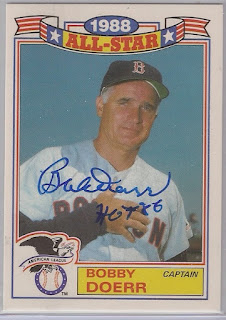 It took me a while to find that legendary cuts card and ironically the day after I bought the card at a card shop I swung through the card aisle at Target. What was sitting at the top of the $4 pack of randomly assorted cards in a clear plastic hanger? Yup. This 1989 Topps commemorating the 1988 All Star Game.
Also signed "Bob Doerr HOF 86"


Mr. Doerr was kind enough to sign these two cards for me from his home address in only 14 days.
Posted by RJ at 5:21 PM