And I'm sure this guy has seen his fair sure of fan mail over the decades. That's right decades. I sent a request to none other than pitcher Jamie Moyer as he attempts to break camp after a year lost to Tommy John surgery.
Moyer was the 6th round pick of the Chicago Cubs in 1984 and made his MLB debut in 1986 for the Cubs. Since being brought up to the show in 1986 Moyer has played consistently besides missing the 1992 and 2011 season due to injury and being sent to the minors. He has played for the Cubs, Rangers, Cardinals, Orioles, Red Sox, Mariners, and Phillies while he is attempting to comeback again to the MLB with the Rockies.  He was an All-Star in 2003, World Series Champion with the Phillies, and won the prestigious Roberto Clemente Award in 2003.
Though his career isn't finished and he apparently has been crisp in camp so far these numbers are pretty impressive. Through his 24 year career, Moyer enters Spring Training with an astounding 267-204 record across 4020.1 innings and 33 Complete Games. His career 4.24 ERA is supported by 2405 Strikeouts. 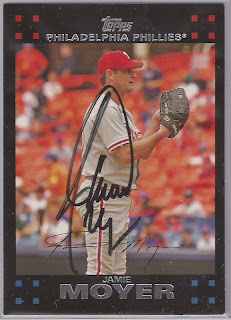 Mr. Moyer was nice enough to sign this 2007 Topps card for me in only 14 days sent c/o the Colorado Rockies at their Spring Training facility. I like how you can see there are still strong characteristics in his signature years later like on the "J" and the "Y".
Posted by RJ at 7:53 PM