I was happy to see a response sitting in my mailbox with a familiar postmark. Florida. Oh Florida, how many letters are sitting somewhere in a clubhouse waiting for your response? Oh well I guess not this letter because it's actually from retired outfielder Mike Cameron.

Cameron was taken in the 18th round of the 1991 draft by the Chicago White Sox. I've got to say whoever signed him had a great eye for talent and every other team definitely missed because the man played the game for 17 seasons in the MLB. Cameron made plenty of teams realize their mistake though by causing the Reds, Mariners, Mets, Padres, Brewers, Red Sox, and Marlins acquire him after his time with the White Sox.

During his tenure in many center fields, Cameron was a reliable underrated player. Through the course of his career he won 3 Gold Gloves, and nabbed an All-Star appearance. He hit only .249 for 1700 hits, but drove in 968 RBI's with 278 Home Runs. While hitting for pop and his .444 SLG he was able to get on at a .338 OBP and harassed pitchers with 297 Steals to score 1064 Runs.

Players like Cameron are definitely my favorites. They play amazing defense that saves their team runs. Get on base to force their way to second without being thrown out very often. And if you decide to not respect their bat, you get punished for a double or homer. Guys like this are what you have to surround your superstar player or you won't get the production you need. I hope he enjoys his decision to retire and finds success in his life after baseball. 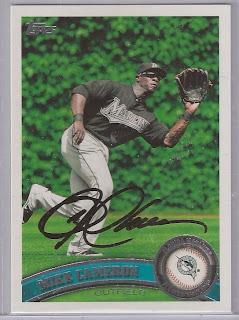 Mikw Cameron was nice enough to sign this 2011 Topps card sent to his home address in only 8 days. I think he actually has a pretty cool full signature. If you ever decide to google yourself now that you've got some time Mr. Cameron thank you for signing my card, I really appreciate getting your autograph.
Posted by RJ at 10:50 PM