And I quite literally mean the Angel's franchise Hall of Fame as the franchise has no members in the Cooperstown Hall of Fame. But it doesn't make getting pitcher Chuck Finley's autograph any less awesome. As many of my fellow bloggers have reported Finley recently did a free autograph signing at Living Spaces. I went with my family and was able to get a slew of things signed by the reliable lefty.

The Louisiana native was the Angels' 1st round pick in 1985, taken 4th overall. The highly polished prospect made his debut in 1986 and stayed in the Majors for 17 seasons. His time in the MLB was well regarded across baseball as he was a 5-time All-Star. When he finally retired in 2002, Finley's 3.85 ERA supported a 200-173 record and 2,610 Strikeouts. He did improve that record in my mind to 201 as he was the winning pitcher at Angel Stadium of the 2010 Celebrity Softball All Star Game.

Though he was dropped of the ballot in his first year of candidacy for Cooperstown, Finley was inducted into the Angel Hall of Fame in 2009. He's been on hand for plenty of important Angel events such as the All Star festivities in 2010, and being there to celebrate Jered Weaver's 2011 contract extension.

Finley signed for fans at Living Spaces and was kind enough to sign multiple items for everyone as well as a photo that was provided. And don't worry folks I didn't roll up and hand him a huge stack of cards. My family and I split up the cards so we all got the chance to meet him, but my family was nice enough to give me the autographed cards. 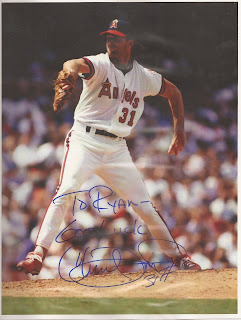 Finley was nice enough to personalize "To Ryan Good Luck Chuck Finley 31" on the free 8x11 he gave me. 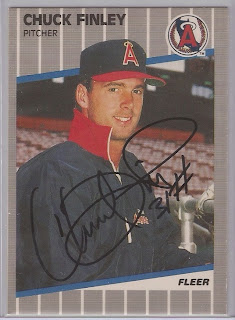 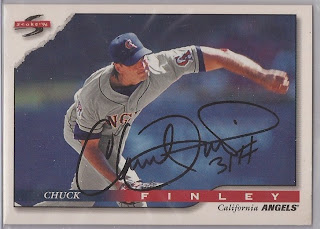 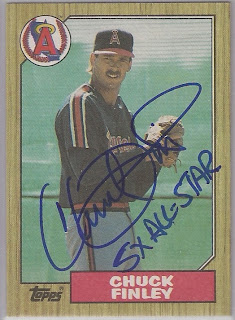 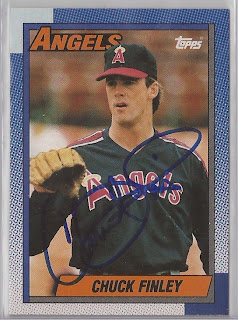 And autographed this 1990 Topps.

It was awesome to meet Finley and see him being so fan friendly. He really didn't have to sign multiples or take photos with fans but he did. When some people even got in line more than once he graciously signed for them and if they wanted another 8x11 he checked the size of the line to make sure he'd have enough for everyone. It was great to prepare for another season of baseball with this signing.