Well I suppose they don't mean to be a pair, but since one of their biggest claims to fame involves one another they're stuck as one as far as I'm concerned. Catcher turned science project/first baseman Scott Hatteberg responded to my TTM request and is a nice addition I've slotted next to my Billy Beane card.

Hatte was a 1st round sandwich pick for the Red Sox going 43rd overall in the 1991 amateur draft. Hatte would get a minor taste of the bigs in 1995 and 1996, but became the primary catcher for the Sox in 1997. After '97 though he began to split time before eventually being relegated to backup status due to the arrival of catching sensation and future franchise hall of famer Jason Varitek. An injury in his elbow during his final season with the Sox was expected to end his career as he could no longer throw a baseball.

One thing Hatteberg continued to do despite the catching job going to Varitek was find a way on base when he was given at-bats. This skill was the key to his career surviving as Oakland A's GM Billy Beane was looking for just that ability to rebuild his team in 2002. Hatteberg became a leading symbol of Beane's "moneyball" era and use of statistical analyses to find diamonds in the rough. Hatte became a first baseman for the A's and is most remembered for his walk off home run in the 11th inning against the Kansas City Royals to give the A's their American League record 20 game winning streak.

When he finally retired after a stint with the Cincinnati Reds Hatteberg had managed to extend his once presumed dead career from 7 seasons to 14. He was a .273 hitter with an impressive .361 OPB despite his limited slugging abilities. His line stood at 1153 hits, 106 of which were Home Runs. While most catchers are assumed to be players who are slow and knock guys in, his 527 RBI are actually fewer than his 538 Runs Scored. 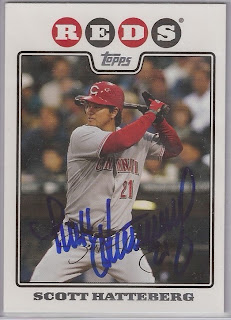 Scott Hatteberg was nice enough to sign and return this 2008 Topps card for me after only 41 days from his home address.
Posted by RJ at 5:08 PM