Oh yes A's General Manager and partial owner Billy Beane has been quite busy this off season. The popular General Manager and former player is credited as one of the driving forces for modernizing the game of baseball into it's current incarnation of stat and metric savy front offices.

Beane's story is a famous one in part due to his unusual transition from player to successful front office member and the bestselling book turned film Moneyball. Billy was taken with the 23rd pick in the first round of the 1980 Draft by the Mets who also drafted Daryl Strawberry in the first round. Despite receiving a full scholarship to Stanford Beane signed with the Mets. Believing Beane to be an advanced player the Mets put him in Class-A ball while Strawberry got to take a slower approach to develop into a more complete player. Beane struggled with the level of competition, and would never be given the opportunity to fully develop before being forced into the Majors.

From 1984-1989 Beane was essentially a quad-A player for the Mets, Twins, Tigers, and A's. Being brought to a higher level of play each season only to falter and be sent down to the minors where he would show he was starting to harness his abilities and be rushed back up to the Majors for a few games where he wouldn't be able to stick. Finally Beane walked out of the clubhouse and into the front office where he became an advanced scout for the A's and never left eventually becoming General Manager and a part owner.

As GM Beane helped popularize "Moneyball" throughout baseball. Using metrics to determine players' true values based on statistics such as OBP, SLG, and advanced defensive statistics. With one of the smallest payrolls in baseball Beane found success in the early 2000's setting the American League record of 20 consecutive Wins and 4 strong appearances in the playoffs. Since his success other front offices such as the Red Sox, Angels and the Blue Jays have strongly invested in the principles of sabermetrics and the landscape of the game has rapidly been changing. 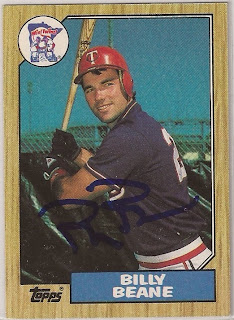 Beane signed this 1987 Topps card sent to his office at the Oakland Coliseum in only 7 days. Interestingly it was postmarked and sent back at the same time Beane is to have been signing Cuban outfielder Yoenis Cespedes. I guess since Beane got Cespedes' autograph on his contract he decided to give out a few of his own.
Posted by RJ at 5:07 PM