That's right folks. I went to my local card shop and bought 2012 Topps. I highly doubt I'll buy any more now that I've wet my taste buds and have been pleasantly surprised but honestly not all that interested in the set.

Not only did I buy 2012 Topps, but I invested in a hobby box of 36 packs. I know some of you may be surprised seeing as the pack hits I've always shown were blaster, jumbo, or even rack pack hits, but I decided to live a little. With 2012 being so mixed and me already being able to secure a few Angel cards to work on this season I decided if I were going to get a taste I may as well invest in something that would leave me happy. The major selling point for me though was not only the Gold Rush Wrapper Redemption going on, where I was pretty intrigued in the design and autograph possibilities, but my card dealer offered to give me the final 14 hobby wrappers I'd need to finish my required 50 for FREE.

I scored a fair amount of parallels to try and get in person or mail out and went right on the average with the redemption cards online. I was able to get a nice pair of cards out of the box. 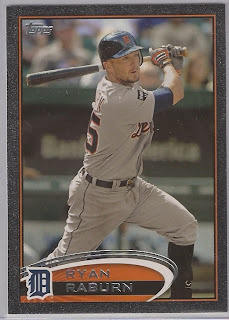 And more importantly a Jordan Zimmermann Golden Moments autographed card. I'm big on Zimmermann in general and I think the card is a pretty nice looking one as far as the inserts go. Jordan is a key part of the Nationals' resurgence into relevance providing a strong 1-2-3 punch with Strasburg and Gio Gonzalez. Last year was his first season back from Tommy John surgery and he posted a respectable 8-11 record with  3.18 ERA before he was shut down to watch his innings. I'm looking forward to big things from the former second round pick. 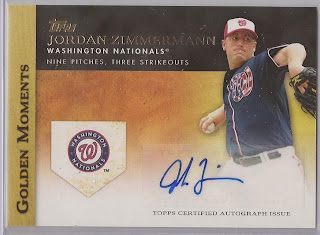 Not a bad pair of items to find in my box. I'm pretty pleased with them both and fairly sure I'm done buying series 1 of 2012.
Posted by RJ at 7:31 PM