And it's a pretty good reply from a durable player. Former Tiger's pitcher Mark Thurmond was nice enough to still be a consistent performer, but this time as an autograph signer.

The Houston native Thurmond was taken in the 5th round of the 1979 draft by the San Diego Padres. He would eventually make his debut in 1983 for the club, finishing in the top ten for the NL Rookie of the year. He was a pretty consistent starter for the Padres but eventually traded to Detroit for Dave LaPoint. With the Tigers he was part of the 1987 bullpen that had the Tigers put up a banner year 98 Wins and advance to the ALCS. After his time with the Tigers he went on to play for the Orioles, Astros, and Giants.
When he finally retired from baseball he had a respectable career line after his 8 seasons. After 97 starts in 314 games he finished with a 40-46 record, 3.69 ERA, and 320 Strikeouts. Thurmond's time in the bullpen also gave him 21 Saves as an occasional closer in the later part of his career. Interestingly despite playing in 314 over 8 seasons and being shuttled repeatedly between the rotation and the bullpen Thurmond never spent time on the disabled list. Besides his time in the MLB Thurmond was also a member of the 1978 Amateur World Series where his team took the Silver. 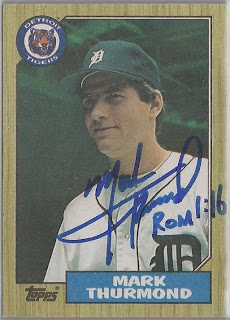 Mr. Thurmond was nice enough to put a really nice signature on this 1989 Topps card sent to his home address after 8 days. He added the inscription "Romans 1:16" under his pretty interesting but very legible signature.
Posted by RJ at 8:24 PM