I was pleased to open my mailbox and see a quick reply from former Angel pitcher T.R. Bryden. I was pretty excited to see the reply from his as it's another step closer to working on the 1987 Angels team set. I think the most difficult person to get from the '87 Angels team will be Reggie Jackson which could prove to be ironic.

Bryden was signed by the California Angels in 1981 as an amateur free agent, but didn't make it to the show until 1986. The Washington native's career only lasted through the '86 season in which he appeared in 16 games. While with the club he posted a 6.55 ERA with a 2-1 record, but was then returned to the minors for 2 final years in baseball. 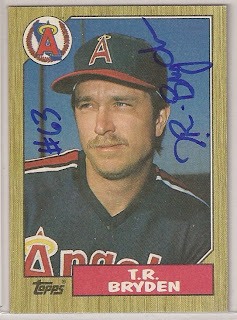 Mr. Bryden was kind enough to sign this 1987 Topps card for me in only 10 days from his home address. I think he has a great signature, and considering how short his cup of coffee in the bigs was I really appreciate him taking the time to sign with such care and promptness. He was also nice enough to answer the questions in my letter and share about his MLB experiences:

How did you find out you were being called up in '86?
I probably should have checked his lone season's game log before I asked this question, but I think it's a testament to his abilities that he "Made the team out of spring training!" especially when looking at his minor league stats you see Mr. Bryden was productive, but not dominant before making the team. He must have given the club quite a dominant spring to earn his roster spot.

What was it like pitching to Bob Boone?
I had the pleasure of meeting Mr. Boone through the Angels 50th Anniversary celebration, and it was great to meet the 7-time Gold Glover. It's easy to understand why he was so well regarded as a catcher when you add how he called games since Bryden admits "I shook him off 1 time!"

What was it like to collect your first win?
Considering he was only able to collect 2, I'm sure each one was special to him especially since he came into the game as a reliever so he never knew what the result be besides "Shock!"

Did any player especially try to help you adjust to life in the MLB?
"Reggie M. Jackson" Needless to say I was a little shocked when the sure Hall of Famer was the player named to welcome the career Minor Leaguer into the bigs, but it only adds to what it means to be a man of Hall quality.
Posted by RJ at 10:55 PM