Yup the replies have slowed a bit but they're slowly making their way back as I send them out. This time I was able to get a reply back from from Tigers catcher Mike Heath.

Mike was drafted in the second round of the 1973 draft by the New York Yankees at only 18. The high level prospect was given time to develop and made his debut for the Yankees in 1978. Heath was included in the trade that brought Dave Righetti to the Yankees and sent to Oakland for a substantial portion of his career. While he was with the Oakland A's in 1983 he caught rookie Mike Warren's no-hitter on his final start of the season.

He eventually moved again via trade and eventually caught on with the Detroit Tigers. While he was with the Tigers he was part of their banner 1987 season where they advanced to the ALCS after a 98-64 season. As a Tiger Heath was known for his strong arm and defense that helped the club as well as a reasonable bat that kept him fighting his way on base. After the Tigers Heath went on to play a final year of baseball for the Braves.

When he retired Heath had played for 14 season in the MLB across 5 clubs. He had appeared in 1325 games and crossed the 1000 hit mark. With only 86 Home Runs and 469 RBI, Heath still maintained a respectable .252 average to go along with a .300 OPB. What's surprising is that as a catcher not known for too much pop Heath ended his career with an impressive 27 Triples. 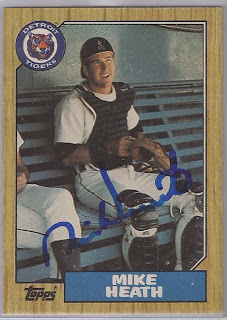 Mr. Heath was nice enough to sign this 1987 Topps card sent to his home address and get it back to me after only 14 Days.
Posted by RJ at 1:25 PM