I know part of the first wave of 365 send outs were current players, but I did reach back a bit for this one. I wrote to former Mets pitcher Craig Anderson, a member of the inaugural 1962 Mets team. Having secured Eli Grba's autograph the first player ever to be an Angel, I thought it was important to recognize baseball's other child of the 60's the Mets.

Craig Anderson was signed by the St. Louis Cardinals as an amateur free agent before the 1960 season and made his MLB debut for them in 1961. Anderson was then taken by the Mets as their 8th selection and the 16th selection overall in the 1961 Expansion Draft. Anderson played in the MLB for 4 seasons before leaving baseball behind. He would retire with a 7-23 record, 5 Saves, and a 5.10 ERA.

What Anderson does have is a special place in Mets history beyond just being a member of their inaugural team. Anderson collected the first Save ever for the Mets franchise. He was also the losing pitcher for the last baseball game played at the Polo Grounds. 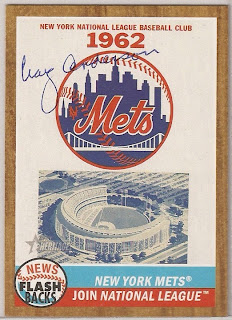 Mr. Anderson was kind enough to not only autograph this 2011 Topps Heritage News Flashback card but also answer a few questions:

How did you learn you were taken in the 1961 Expansion Draft?
In todays digital world it's pretty easy for teams to communicate with players and agents, but occasionally you still find a story with Twitter breaking news of a trade before the player is even told. In the 60's players found out they were being shipped out in the draft at the same time as everyone else by picking up a "St. Louis newspaper".

What was your favorite memory playing in the Mets inaugural season?
With only 7 career Wins every one must have been special but Anderson was remarkable by picking up a pair by doubling down and "Winning a doubleheader on 5/12/62" over the Milwaukee Braves.

What was Red Ruffing like as a pitching coach?
During the Golden Era of the Yankees Red Ruffing was a pitching stalwart and for the first year the crosstown rival Mets existed they reached for an ace to teach their staff to set the tone. It wasn't quite effective but the players all got to learn from a Hall of Famer who was an, "Easy going, nice man".

How do you think the game is different now from when you were in the League?
Playing in the 60's is definitely different than now in many regards but in Anderson's view the biggest difference is, "more speedy players".

Mr. Anderson was kind enough to autograph my card and reply to my letter sent to his home address after only 11 Days.
Posted by RJ at 12:35 PM