I've always thought it would be really cool to end up in the background of a player's trading card. I'm kinda in the background of Bobby Abreu's 2012 Topps card seeing as I was at the game sitting 6 seats to the left 15 rows back, but the crowd isn't in the actual photo. I know I was there though seeing as Abreu made 18 appearances in left field all season and the photo may look cool, but he almost missed the catch AND after he made the catch almost fell down into the bullpen wall. Hence his very not so confident face in the picture. So yeah. I was there for Bobby Abreu's 2012 Topps photo. Cool. 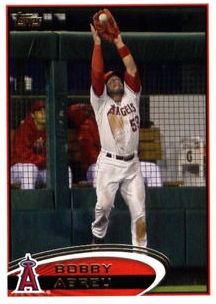 Anyways. My friend David was on TV for the Albert Pujols press conference and is pictured on Yahoo's fantasy summary of the 2012 Angels AND is in Sports Illustrated. Did I mention he got Pujols to sign his ball too? Some guys get all the luck. David has a blog that many of you are already reading, but those not reading can find it see his goodies at David's Autograph Signings.

I guess since he was in SI I should get his autograph too. Just another thing to put on the to do list.

Oh and ps. Moneyball was robbed at the Oscars. Billy Beane was there though to see it happen supposedly. I wonder if he went to check out the remnants of Mannywood too.
Posted by RJ at 10:04 PM