Yup that's right folks another reply for the challenge, and it's an especially cool one. With spring training just beginning one of the big 2012 story lines has been a fairly regular one, who's healthy. This is especially true for the San Francisco Giants who hope Buster Posey will hold up through the season and Brian Wilson will as well. Did either reply to me TTM? Nope, but the photos of Brian Wilson dominating the blogosphere made me "fear the beard" 1989 style a la the original beard, Jeff "Terminator" Reardon.

Reardon was a amateur free agent signed by the Mets in 1977, and eventually broke into the bigs with them in 1979. He was very consistent for the Mets and they ended up trading him to the Montreal Expos where he would make a name for himself as a dominating closer. For 11 consecutive years of his career Reardon would Save at least 20 games and twice hit the 40 Save mark. For the next 16 seasons he would be a linchpin closer for several clubs such as the Twins, Red Sox, before slowing down in the end of his career with the Braves, Reds, and Yankees.

When he finally walked away from the game Reardon was at the time the All Time Saves leader with 342 career Saves before his record was broken and eventually shattered by others along with Trevor Hoffman and Mariano Rivera. He was a 4-time All-Star, World Series Champion with the Twins, and was the NL Rolaid's Relief Man of the Year. His career line in 880 appearances would be 73-77 with 877 Strikeouts and a 3.16 ERA. 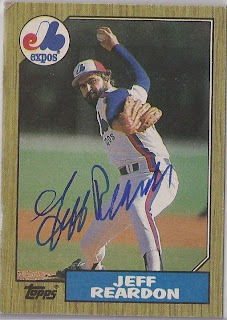 Jeff Reardon autographed this 1989 Topps card sent to his home address and return it to me quickly after only 10 Days.
Posted by RJ at 9:44 PM