I was able to get another score in the mail this week, though I was kind of sad when I opened up the return envelope. I have a good mental track of what areas I send cards out to, and typically I try to avoid sending cards out to the same area so to help my organic organizer. I actually thought the post mark meant it was a certain pitcher I'd been hoping to get but instead it was a excitingly fast reply from Second baseman Danny Espinosa.

Danny is another local talent from Southern California who was taken in the 3rd round of the 2008 draft by the Washington Nationals. He sped through the minors and was a September call up for the Nationals in 2010, and became the regular starting second baseman in 2011. Espinosa is part of the Nationals hopefully less expensive homegrown core that will provide run support for Strasburg, Zimmerman, and Gio. If he follows up his rookie campaign with another solid season it's not unreasonable for him to put up a 20/20 season.

Despite a .232 average between the season and his 2010 call up, he crushes the ball when he makes contact with 27 Home Runs and 33 Doubles in only 186 games. When on the base paths due to a remarkably steady eye that has given him a .323 OPB despite the low average he's proven to be a surprising nuisance to opposing pitchers with 17 steals. He's actually proved to provide a reasonable glove though I'm not sure he will be winning any Gold Gloves anytime soon. 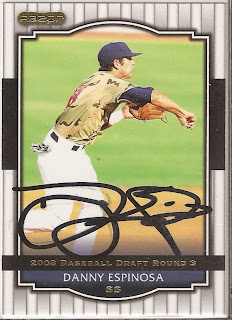 Espinosa signed this 2008 Razor Signature Series card for me from his home address in only 5 Days. I think it's an awesome card and especially like that he signed across the light part of the card though I think it would have been beautiful in blue.

You can find Danny Espinosa's twitter here.
Posted by RJ at 5:48 PM