Well today I decided to prepare for the coming season with a quick trip to my local collectibles' show to stock up on a few supplies. I didn't do anything too crazy, just a few specialty balls that I've got specific players in mind for and some card protectors. But while I was wandering around browsing for a few singles, I unexpectedly saw one of my friends at one of the card dealers. While we chatted I couldn't resist breaking open a box of 2011 Topps Lineage that was just calling my name as the lone box not neatly stacked with the others.

What was in it? Well there was a redemption for a Ian Kinsler autograph, which is pretty cool seeing as I'm never able to get him to sign at the stadium and he's not a reliable TTM'er. What else was in it? Oh just 2011 World Series Champion closer Jason Motte, which I'll probably do a separate post for later.

Those of you who have cracked open a box of Lineage know there are 2 autographs and 1 relic inside. The relic was a Game Used Jersey swatch from Cooperstown resident Hank Aaron. Yup, that's right. Hank Aaron. 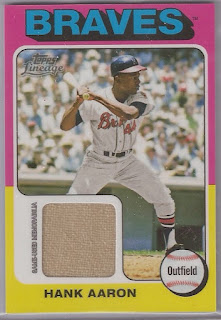 The card is currently residing next to my Jason Heyward pull, which will hopefully help him bounce back from last season and fulfill his potential this season. I'm not really sure if I need to do a full player bio for one of the greatest baseball players of all time, so here are a few highlights. He is a 25-time All Star with 755 Home Runs and 3,771 hits. He won a World Series in 1957 with the Braves and was inducted into Cooperstown in 1982 with 97% of the vote.