Or at least couldn't knock them off Chicago White Sox reliever Sergio Santos. As mentioned in Weekly Rundown 3- Angels Summary 5/9-5/15 the Angels lost on May 11th to the White Sox after Santos came in for 2 shut out innings in relief.

Santos was drafted in the first round of the 2002 draft by the Arizona Diamondbacks as a shortstop out of Mater Dei High School in Santa Ana, California. He eventually worked his way up through the Diamondbacks' farm system upto Triple-A Tuscon. After reaching AAA ball in 2005 Santos stalled and was bounced around through trade and free agency before finally landing with the White Sox only to be shipped off again. However, only two weeks after being sent in a trade he was brought back to Chicago with the plan to be converted into a pitcher.

Throughout 2009 he pitched his way across the White Sox system and made the 2010 Opening Day roster as a reliever, winning the final bullpen spot in Spring Training. In 56 appearances he held batters to a .261 average and 2.96 ERA.

His 2011 campaign has built off his 2010 success and batters are only hitting at .161 clip with a 0.00 ERA in 15 games. Though not formally named the closer for the team manager Ozzie Guillen has used Santos effectively and he has collected 2 Wins and 5 Saves. If he continues to use his arsenal of off speed pitches with his 90's fastball Santos will continue to rack up the K's already having 22 against 9 Walks. So long as balls keep missing batters' bats Santos will prove to be an important part of the White Sox pen. 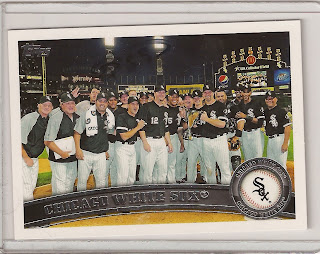 Sergio signed this White Sox team card after throwing a bullpen session at Angel Stadium before joining the other relievers in shagging flyballs during batting practice. It was really nice of him taking a minute to sign on his way out to join the other players even though the signature is a little tough to read since he signed in the black of the card with my sharpie.  At first I thought he wrote two numbers but realized it's three "S"s for Sergio SantoS.
Posted by RJ at 3:00 PM