So today is a bit off track from the format the blog is going to normally follow. Mainly because I was out picking up shaving cream after running out this morning and seeing a "Gems Of the Game" box off to the side of the checkout stand as if some kid couldn't convince his parents to buy it, but didn't want to take it back to the rack. While waiting in line I picked it up to see what it contained and was intrigued by the prospect of a graded card being inside along with a plethora of random packs. Needless to say I added it to my purchase. So instead of the normal summary I give I'll just be posting some of the cooler cards, and no offense to the cards but they're all up for trade.

First up is the card that first intrigued me to buy the box. The graded card. 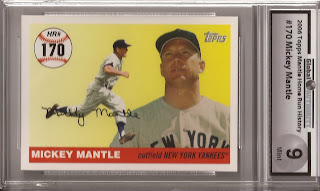 It's a 2006 Topps Mantle Home Run History Card, Home Run #170. And it's graded to be a 9 by Global. I think it's a fairly cool looking card of Mantle, and it being graded is just kinda nifty. Not exactly what I was hoping to pull, but I could have done far worse.

One of the packs inside was a weird one I hadn't heard of yet, a Goodwin Champions 2009 pack. Inside was a cool looking Justin Morneau, an Upper deck insert featuring Alex Rodriguez, and these two minis. I'm a big fan of minis so personally the money spent for the minis and Mantle was worth it just so I could get it out of my system.

The Manning is a black border with Gypsy Queen on the back. With the current Gypsy Queen set dominating the blogosphere I was wondering what all the hype was about. Reading about the price practices some hobby shops and internet retailers were using didn't really have me running around trying to track them down. Landing one randomly while out on some errands was pretty nice and I've got to admit now I understand the hype. I wish the Manning mini had been maybe baseball related, but if I had to get a non-related card his isn't one I mind.
Sometimes when I read about the other local team, the Dodgers, I forget how young Clayton Kershaw actually is. It was easy to see though considering this 2007 Tristar isn't very old and he doesn't look all that much different now than then. It may be a bit Loon-y but I think it's a nice addition (bad joke I know). 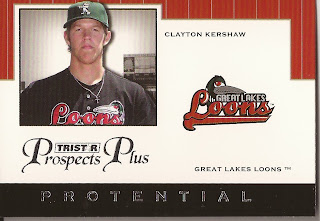 And while I'm talking about random I finally was going through my Topps 2011 Heritage and was trying to figure out what was a short print. Now if I'm right and know how to read the annoyingly confusing 2011 Heritage SP guidelines these are the #473 and #478 short prints. I know there are a few readers who collect the set and I thought I'd post these two as long as I was in a Gypsy trading mood while writing. And needless to say the cards look cut on the side, they aren't it's just how they lined up on the scanner. I'll send perfect scans if anyone is interested.

It wouldn't take much to get pretty much any of the cards posted today. To be honest I'm starting to get a lot of Upper Deck and I'm not overly in love with them and prefer Topps. Perhaps I'll post the lot of them sometime soon so someone can take them off my hands. Leave a comment and/or shoot me an email at RJWritings At Gmail Dot Com
Posted by RJ at 4:48 PM