Edwin Jackson. Yup the Angels got a little too much action from Edwin Jackson last night. Jackson pitched 7 shut out innings giving up only 5 hits and a walk while punching out 5. The Angels went on to lose 8-0 with Ervin Santana and Trevor Bell getting shelled.

Jackson was was drafted by the Dodgers in the 6th round of the 2001 draft and has been consistently inconsistent throughout his career. His solid potential and promise has caused multiple teams to take a chance on him when he begins to slump causing him to have been traded from every team he's been on. The Dodgers sent him to the Tampa Bay Rays, Rays to Detroit Tigers, Tigers to Arizona Diamondbacks, and finally Diamondbacks to his current Chicago White Sox.

The various teams and leagues have had Jackson accumulate a 51-55 record, 4.60 ERA, with 692 career strikeouts.

In 2009 he was selected as an All-Star after a solid season in Detroit. After being shipped off to Arizona he went on to reach his career's biggest highlight so far, pitching the franchise's second no hitter against his former team the Rays on June 25, 2010.

2011 has been marked ups and downs for Jackson sitting at a 3-4 record with an 4.29 ERA. Despite racking up 39 Ks he has issued 19 Walks and batters are hitting .278 against him. In 8 starts he has been able to work his way out of jams giving up 3 or fewer runs 4 times but being shelled for 4, 6, and 7 runs in his other starts. Despite the flashy 39 strikeouts he racked up 13 against Tampa Bay and has only averaged about 4 strikeouts. He definitely has front of the rotation stuff, but allowing so many base runners will continue to cause him problems. 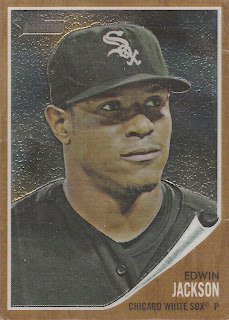