RBI (6) I better keep the blog from going wayward...

And get back to talking about a cards with one from Heyward. That's right folks today as I was getting ready to leave for work I heard a few rings on my doorbell. I went to the door to see who it was, and it was my friendly neighborhood spider...I mean mailman. I was a bit surprised to see him as I hadn't ordered anything that I could think of when he handed me a small bubble package to sign for. I signed, went to the counter and popped it open it by pleasantly surprised.

If you've been keeping up and remember my very first pack ever was a Bowman Platinum that contained a wonderful Mike Trout autographed refractor. Well the second pack was pretty nifty too, you see it contained this weird little card inside. 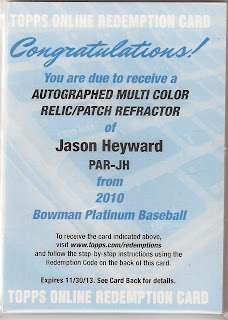 I logged onto the Topps site and filled out the redemption information and proceeded to mainly forget about it since the site informed me it expected delivery in mid-June. Well here we are in the first week of May and the mailman delivered this! 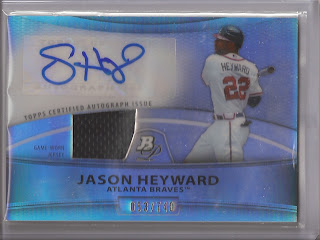 Yup that would be an Jason Heyward autographed refractor with a game worn Jersey relic numbered 53/740. I'm not very well versed in Braves gear so I'd appreciate anyone who could help me identify what it came off of. Jason Heyward's autograph is definitely a crown jewel within my collection. To say I got lucky with my first blaster of Bowman Platinum is an understatement.

Heyward is a talent very similar to the other outfielder I pulled in the blaster, by that I mean a future franchise cornerstone. Named the 2009 Minor League Player of the Year by Baseball America and USA Today, and was the consensus number one prospect in all of baseball coming into the 2010 season.

Heyward was known for strong plate discipline and delivering towering home runs and demonstrated both when he joined the major league club.  During the Braves 2010 Spring Training a Heyward homer broke the sun roof of Braves Assistant GM Bruce Manno and David O'Brien of the Atlanta Journal-Constitution reported Manager Bobby Cox said the Braves would most likely install nets to protect the cars from $3,400 dollar damage estimates like Manno's.

When he began the season as the starting right fielder for the Braves he was assumed to be a lock for National League Rookie of the Year honors. He further fanned the flames of hype when he homered in his first Major League at bat off Carlos Zombrano. For his efforts he was elected a starter for the 2010 All-Star game, but due to a thumb injury that began to hamper his season did not play. He finished the season with only a .277 avg but a staggering .393 OBP in 142 games. His power numbers flashed with his 18 Home Runs, 5 Triples, and 29 Doubles with his 11 steals. Despite his strong numbers he was out shined for NL Rookie of the Year honors by fellow Georgian Buster Posey who ran away in the second half leading a resurgent Giants club to steal the NL West from the Padres in the final game of the season and eventually win the 2010 World Series.

In 2011 Heyward started the season the same way as 2010 and went deep off Livian Hernandez in his first at bat of the season and is helping the Braves stay in the hunt for the NL East title. In 32 games he is batting only .241 but again with a high on base percentage reaching at strong .346 clip. When he is connecting he's muscling the ball very well and has 7 Home Runs, a triple, and 4 Doubles.  While he isn't hitting for average so long as he keeps being a constant long ball threat and taking walks, it's highly unlikely many in the Braves organization will complain about having a Gold Glove All Star in the organization.