As far as I'm concerned this is one of the biggest little superstars in the game. Now announcing...the starting second baseman for the Boston Red Sox....Dustin Pedroia the Destroyahhhhhhh. Yes the cornerstone second baseman who Jason Varitek has stated as being such an influence on the Red Sox that he would be worthy of wearing the "C" on his chest after "Teks" eventual retirement.

Dustin Pedroia is a California native from a place called Woodland. After leaving Woodland Senior High he went on to Arizona State University where he played with Andre Ethier and Ian Kinsler.

2004 was a great year for the Red Sox. After a prolonged and famous streak of championshipless years the Sox finally broke the Curse of the Bambino and won their first World Series of the 2000's. Not only did they win some shiny rings, they struck gold when they took Pedroia in the 2nd round of the 2004 draft.

After working his way through the minors as a tough little second baseman/shortstop he finally made his way into the Red Sox lineup as the regular second baseman in 2007. The Sox went on to win their second World Series of the decade with Pedroia also claiming the AL Rookie of the Year award.

Pedroia continued his grab for hardware taking the 2008 AL MVP award with a .326 average, 17 home runs, 83 RBI, and 20 steals. He tied for the lead in the majors for number of hits with 213. He became just the 3rd player to take the MVP award the year after being named Rookie of the Year.

2011 has been tough for the second baseman as he currently is only batting .237 with 2 home runs. Despite his hitting woes he has continued to get on base at a solid .355 OBP and named 5 steals. He is fighting his way on base like that spark plug he is known to be. 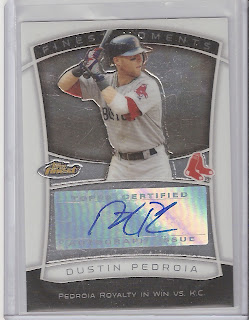 I bought this Dustin Pedroia autographed Topps Finest moments card while at the All-Star Fan Fest in Anaheim, California. It was my main souvenir to remember the fun day and I'm glad I was able to make the purchase.
Posted by RJ at 4:09 PM