RBI (4) A speedy return from a speedy Petey

Well while the Angels are on the road in Boston I think it's a good time to bring up my first TTM success. On April 19, 2011 I popped a few letters in the mail, but I was most anxious over the one to my favorite Angel on the roster. This is a player with not only more nicknames than the average player, but pretty awesome ones. I'm referring of course to Peter Bourjos aka "Gorgeous Bourjos", "Speedy Petey", "PB n' J", and "Peter Rabbit".

Bourjos was the Angels' 10th round selection in the 2005 draft and has proven to be quite the prize for the Angels scouting department.

When he initially came up with the club in 2010 some were concerned over moving 9-time Gold Glover Torii Hunter to right field, but Bourjos' play is absolutely stellar and he has quieted all those concerned. Baseball America has ranked Bourjos as the Angels "Best Defensive Outfielder" as well as "Fastest Baserunner" and he has already accumulated an impressive highlight reel of would be doubles turned into outs. Despite being known mainly for his speed, Bourjos proved his arm is also an asset and has provided 10 Outfield Assists.

In 2010 Bourjos played in 51 games and had only a .204 avg over 181 at-bats with 40 strikeouts. However he showed signs of making the proper adjustments toward the end of the season and his average began to climb while he used his speed and surprising power to hit 6 Home Runs, 6 Doubles, and 4 Triples with 10 Steals.

Despite the addition of Toronto Blue Jays Gold Glove center fielder Vernon Wells the Angels kept Bourjos with the Major League club as the starting center fielder. I decided that my first batch of TTM attempts would have to include the speedy youngster and I sent a letter as well as two cards to him. Bourjos kept with his fast play and in only 8 Days I was opening my mailbox to find the 2010 Bowman Platinum Rookie Card I sent signed "Pete Bourjos 25". 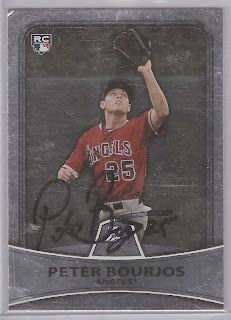 Building off the 2010 success Bourjos is batting .297 with 2 Home Runs,  5 Doubles, and 4 Triples with 3 Steals in only 29 games. In the April 26, 2011 game against Oakland, Peter tied the Angels franchise record for triples in a game with 2. Despite a few errors initially as he adjusted to being flanked by two Gold Glovers he is learning to field the position well at the Major League level and continues to add to his reputation as one of the best new out fielders in the game. Without a doubt he's going to be a top competitor for the Rawlings Gold Glove in Center Field for years to come. Here's one image of his slick fielding on the second card he signed, his 2011 Topps card. 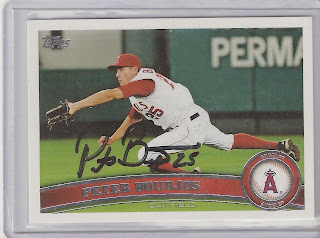 Peter Bourjos signed these two cards sent to him at Angel Stadium along with a letter asking him a few questions, which wasn't included in the return envelope. I just mailed out my thank you letter to him, sorry Pete, but I wasn't able to pick up stamps quite as fast as I wanted to but I appreciate your autograph.
You can follow Peter Bourjos @pbourjos on twitter at http://twitter.com/pbourjos
Posted by RJ at 5:29 PM