So today I went to the Living Spaces furniture store in Irvine for an autograph signing by Erick Aybar. Unfortunately the speedy little shortstop did not make his way over to the signing quickly...or at all. That's right, despite the Angels and the store advertising for more than a week that he'd be signing he no showed and no one called the store to inform them he wouldn't be able to attend. By 11:10 more than an hour after the scheduled start the store managers called it quits and officially informed the crowd it was canceled. I was more than disappointed to not have the opportunity to get Erick's Spring Training Jersey signed that I had bought a few weekends ago at the Angel's Yard sale.

While Erick may be having a hot month with some multi hit games, he burned through some fan respect and is not a hit with us at the moment. Rumor has it that he had previously no showed for the same event in a prior season, and Juan Rivera agreed to sign as a replacement. It's pretty disappointing that he didn't show up for the event, but it's even more disappointing no one from the Angels team or Erick's representation contacted the store to let the fans know.

So on the flip side I'll talk a bit about a consistent signer for the Angels. That'd be former Angel pitcher Clyde "Skeeter" Wright who was taken by the Angels in the 6th round of the 1965 Draft.

Wright pitched for the Angels from 1966-1973 and accumulated an 87-85 record with 3 Saves. With a 3.28 ERA and 571 strikeouts Wright proved to be a reliable Angel arm after the 1969 season when teammate Jim Fregosi convinced him to play winter league ball and develop a screwball and changeup.  As mentioned before, Clyde was an All-Star in 1970, the same year he threw a no-hitter. Finishing the season with 22 Wins set the Angels franchise win record for a left hander, only tied once by Nolan Ryan in 1974. His efforts earned him the American League Comeback Player of the Year Award in 1970.

Since retiring from baseball Clyde opened the Clyde Wright Pitching School in Anaheim, California and he is a fixture at Angel Stadium.

As an Angel Alumni, Clyde took part in the 50th Anniversary Celebration of the Angels franchise. The Angels have former alumni coming to each game to throw out the ceremonial first pitch with a golden ball embossed with the anniversary logo. After the pitch the alumni proceed to sign an autograph for some lucky fans. I was lucky enough to get his autograph and it's a beauty. 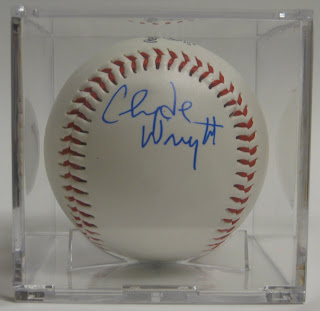 Thanks "Skeeter" for being so consistently great for signing autographs to Angel fans. It's nice to know some players/alumni appreciate the fans and will sign.
Posted by RJ at 2:37 PM